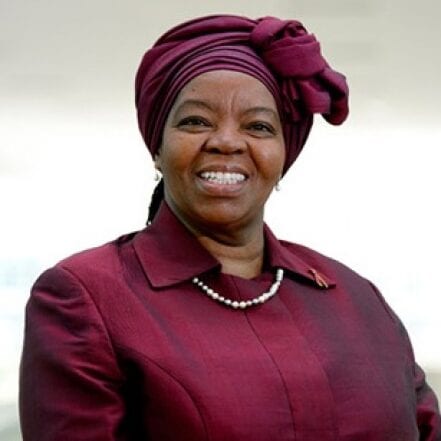 “Bridging the gap between Policy and Implementation in Gender, Reproductive Health, and HIV/AIDS”

Professor Sheila Tlou – whose surname translates literally to ‘elephant’ is a veritable giant in the gender, health care and sexual and reproductive healthcare space in Botswana, Africa, and the world.

To Professor Sheila Tlou, the themes are inseparable, and much of her work includes activism at the intersection of these spaces.

She is a former Member of Parliament and Minister of Health of the Republic of Botswana (2004-2008).

Also, Professor Sheila Tlou was the former Professor of Nursing at the University of Botswana and Director of the WHO collaborating center for Nursing and Midwifery Development in Primary Health Care for Anglophone Africa.

Professor Sheila Tlou has conducted research and taught courses like nursing, pre-medical and social science students on Gender issues relating to HIV/AIDS, Sexual and Reproductive Health and Rights, and Ageing and Older Persons.

She has played a key role in the development of national nursing and medical education curricula, working to broaden the scope of Health Sciences education in Botswana.

Her work on HIV/AIDS

The first case of HIV in Botswana was reported in 1985.

As was the case with the pandemic in the early years, the virus spread quickly, and with Botswana’s small population, the implications for social and economic stability were devastating.

However, Botswana responded to the pandemic and implemented a number of health care reforms and programs including the PMTCT (Prevention of Mother to Child Transmission) in 1999 and universal access to ARVs (antiretrovirals) to those who were at an advanced stage of the disease.

The management of the virus in Botswana is due in large part to the role that Professor Tlou played in those years, and she continues to lend her voice, wisdom, and expertise to the healthcare space worldwide, today.

Her work is ‘numbers’ and report-based, however, one cannot forget that the work that Prof. Tlou continues to do has a major impact on the lives of women, and by extension, their families and communities.

“I am hoping that what I say will inspire young people to be able to ask themselves how they will be able to participate in the implementation of the Sustainable Development Goals because as far as I’m concerned, all 17 of them are… Click To Tweet

Professor Tlou worked tirelessly at the intersection of gender and health, to generate research and forge important partnerships between academia, government, and civil society.

She advocated for real change at the grassroots level in Botswana.

As Minister of Health, she led a forward-thinking and focused HIV care, prevention, treatment, support, and care programme that is used as a model all over the world today; a testament to her knowledge, resolve and leadership.

Professor Tlou is aware of the role that young people have to play in continuing the challenge of zero new HIV infections, zero discrimination, and zero AIDS-related deaths – effectively ending the disease by 2030.

Her work on gender health

Professor Tlou is the United Nations Eminent Person for Women, Girls, and HIV/AIDS in Southern Africa. She is also the International Council of Nurses Goodwill Ambassador for Girl Child Education.

In her past assignment as UNAIDS Regional Director, Professor Tlou provided leadership and Political Advocacy for quality sustainable AIDS response in 21 African countries, from Eritrea to South Africa, including the Indian Ocean Islands of Madagascar, Mauritius, Seychelles, and Comoros.

She has been instrumental in the formation of advocacy bodies such as The Pan-African Positive Women’s Coalition (PAPWC) and the High-Level Task Force on Women, Girls, Gender Equality and HIV in Africa.

Professor Tlou initiated and chaired a High-Level task force on Comprehensive Sexuality Education and Services for Young People in Eastern and Southern Africa.

Because of the uniqueness and peculiarity of the cultural context of African societies, HIV/AIDS thrived in a thick cloak of ignorance, denial, and secrecy that Prof. Tlou has recognized as a deterrent to the success of any programs that may be implemented.

Again, her sensitivity to the fact that women empowerment is a key issue that lies at the heart of HIV/AIDS prevention means that her work is alive to the issues that are particular to African women.

“Gender inequality, gender-based violence, including sexual violence and sexual exploitation, are at the core of young women’s vulnerability and need to be addressed if we are to achieve that SDG of ending AIDS as a public health threat by 2030″.

This very goal gives us a platform to deliver services based on rights, inclusiveness, universality and ensuring that no one is left behind.

Professor Tlou has received many national and international awards. Among them are… “the Botswana Presidential Order of Honor, the Florence Nightingale Award from the International Red Cross Society, the Trailblazer Woman Leading Change Award from the World YWCA, the Leadership in Health award from the Global Business Council (Health)”.

“Leaders who are able to communicate the importance of their activism are often able to inspire groups to pull together towards a common goal”.