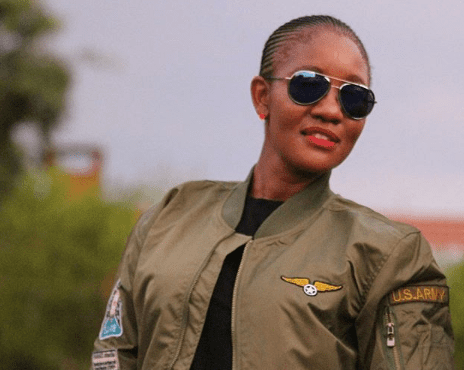 Captain Kgomotso Phatsima is best known in Botswana for her pioneering work as one of the few women pilots in the country. Her career began in the military, and she diligently worked her way up to becoming a real force to be reckoned with.

Captain Phatsima’s work as a pilot and her passion for youth development led her to discover that there were very few girls who were adept at – or even interested in science, technology, engineering and mathematics (STEM) subjects, which are key for the aerodynamics space.

Not only are STEM subjects integral for becoming a pilot, or engaging in the aerospace industry, they are also essential for the development of human capital and the future of business in Botswana, Africa, and the world.

Connect with Kgomotso Phatsima and her business on social media.

Why I founded Dare to Dream…

After I qualified as a pilot, I sat down and thought: ‘What can I do to give the upcoming generation – especially those who grew up in a village, like me – an opportunity to do that?’.

I started Dare to Dream to give back to the community and to try and open up their eyes to opportunities that they wouldn’t otherwise be exposed to.

I will talk about myself and my own experience here.

When I told my parents that I want to fly and be a pilot, my mother said ‘In our time, a girl could never fly a plane. You cannot be a soldier!’

Sometimes it goes back to our upbringing and the culture. A girl must be domestic, and boys also have prescribed activities.

So we separate ourselves from engaging in these things. The same mindset goes on to say that ‘Some things are hard, and are only for men’, like piloting or engineering.

With some of our families, their backgrounds are what can hinder the involvement of girls in certain subjects and limit girls to certain careers.

But as the times and technologies change, and with other women and organizations such as ours showing that it’s possible, there is more of an acceptance that you can be and do anything you want.

Is Africa / Botswana in a good position to keep up with the world’s “breakneck’ speed?

I think so because the demographic dividend of the youth in Africa indicates that young people make up most of Africa at 60 percent.

I think that the whole of Africa is at a good advantage to participate in the technological changes that are taking place right now.

There are a lot of young people who are interested in technology. I also think that Batswana are in a good position to take advantage of what is happening.

In other African countries such as Rwanda, you’ll find that coding and robotics are taught in schools and they are part of the curriculum.

Recently, President Cyril Ramaphosa of South Africa stated that coding will be taught in schools. We in Botswana are a little slower in catching on to these developments.

At Dare to Dream, we partnered with Airbus to sponsor 1,500 students across the country in rural places and trained them in robotics in order to prepare them for 4IR.

It was also important that they know that there are careers in the aerospace industry that are STEM-related that they can take advantage of.

We are looking forward to partnering with the Ministry of Education, but there have been some delays, which I hope will be overcome in the future.

We have engaged Airbus and also partnered with Botswana Innovation Hub, the University of Botswana and Botswana International University for Science and Technology – BIUST.

BIUST created an initiative to encourage young girls to get into STEM subjects because they realized that the number of girls applying for these subjects was low. They had called 100 girls from Central District schools to participate.

We form partnerships with organizations with the same mandate as us. For example, Debswana is interested in the 4IR and getting young people engaged in it, so we have partnered with them and they have assisted us to roll out our programs.

We have also done work with Major Blue Air, who own planes. The girls get a chance to get onto the planes, and I fly the children.

It’s not just about STEM, it’s about exposing the girls to new experiences and igniting the passion within them. There are other organizations doing work in the same area, and we are looking forward to also having them on board.

There is something very powerful about collaboration.

We have also recently partnered with EcoNet, who have chosen me to lead the Youth Development Programme in coding and entrepreneurship.

What we are doing differently is that we are teaching the kids how to code and build websites, but also entrepreneurship and leadership skills. We have enrolled the first 500 participants and we are starting in July this year.

The role Dare to Dream is playing in the conversation (and action!) towards Africa’s readiness for 4IR…

Even though we have trained 1 500 students, we realized that there is a gap with the teachers, and so we are preparing to train teachers in order to fill that gap.

After going around the country and doing work in 40 schools, I realized that the teachers themselves don’t know about 4IR, coding or robotics. Coding isn’t part of our curriculum at the moment; only a few schools have robotics kits, but they don’t know how to use them.

So, then we pulled in Debswana and other sponsors to train the teachers for a week at the University of Botswana. From there, the teachers will go back to their respective schools and train the students.

Also, we want to teach them that they can look around for themselves, and identify where the problems are, and create devices and apps to overcome them, and make money out of them.

The fact that we are training teachers and students is a good step because we are pushing them towards appreciating the importance of 4IR and the power of technology in building businesses.