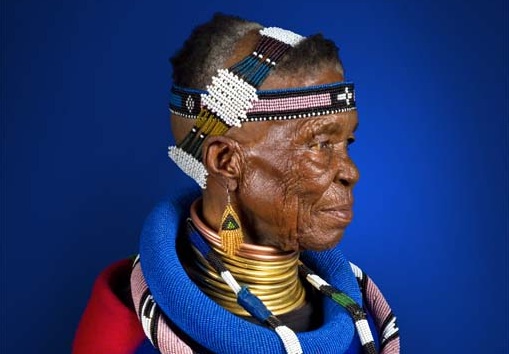 Esther Mahlangu may be the oldest #MotherlandMogul we’ve shone the spotlight on but she is serious goals. She is the world-renowned artist credited with elevating the Ndebele painting and culture on the world stage through her work. Esther is has created a successful brand of her products in Mpumalanga, Kwamhlanga where she lives.

She is known for her bold large-scale contemporary paintings that reference her Ndebele heritage. Esther has worked with the likes of BMW, FIAT, Belvedere and many other globally-recognised brands.

When and where were you born?

I was born in 1935 on a farm outside Middleburg, in the Mpumalanga province. Being the first of nine children —six boys and three girls, I had huge responsibilities at a young age. Yet, my parents and family allowed me to be a child.

When I got introduced to art, they realised that they couldn’t keep me away from painting no matter what duties and chores I had to take up. I started painting at 9 years old, being taught by my mother and grandmother. I was inspired by both women. From as far as I can remember, I followed traditions passed down from my mother and grandmother. I learned traditional Ndebele wall painting and bead-work, as a child that was all I did every day.

I can say I became an expert in executing murals as a teenager, using a wide range of paint colours. Initially, we used to gather traditional soil paint from the forests and by the rivers but eventually we started using modern paints.

Esther Mahlangu: I started painting at 9 years old, taught by my mother and grandmother Click To Tweet

What type of work were you doing before you were discovered as a renowned artist? Who discovered you as an artist and icon for the Ndebele culture?

Between 1980 and 1991 I lived and worked at the Botshabelo Historical Village, an open-air museum of Ndebele culture.

I can say I was discovered in 1986, by researchers from Paris who were travelling the world to document traditional arts. These artists saw the paintings of Mahlangu’s house. They learnt more about why we paint like this and the significance of the paintings.

They invited me to create murals for an exhibition of international contemporary art, the Magicians de la Terre (Magicians of the World). I travelled to France in 1989, and stayed there for two months. I painted a house in front of thousands of spectators that included the media and art lovers. People form Europe got to know about me, where I come from, and the Ndebele culture in South Africa.

After a few months, I was asked to also decorate a wall inside the Angoulême Museum of Fine Arts and so I went on to other locations in France. In 1990, I began to paint murals for public venues in Johannesburg and elsewhere in South Africa. This was soon followed by more locations in Europe and the United States. My work appears in exhibitions in more than a dozen countries.

How did BMW approach you?

BMW got hold of me through the government. They asked me to decorate a so-called BMW “art car” in traditional Ndebele design in 1999. I stepped into the league of Andy Warhol and David Hockney (both world-renowned artists who created previous art cars for the company).

From what I know I was the first woman artist to have been honoured as such.

I exhibited locally and abroad in Australia, America, Japan and in many European countries. Also, I was awarded the Order of Ikhamanga in Silver by the South African presidency for my contribution to the development of indigenous Ndebele arts. I had a painting project with FIAT, British Airways, Belvedere ReD and a project for HIV/Aids with John Legend.

Also, I have many award which I received in South Africa for arts and craft. I have been honoured in the tourism sector nationally and in my province, and in the arts and craft sector. In 2016, I was again involved in a BMW project, painting Ndebele patterns on the real wood interior trims of a BMW 7 series. This was shown for the first time at the Frieze Art Fair in Regent’s Park, London.

This car now takes pride of place at South Africa: the Art of a Nation, a major exhibition currently showing at the British Museum from 27 October 2016 – 27 February 2017.

I had the opportunity to interview you in IsiNdebele for SA Tourism, at the Lilizela awards. How did you feel winning the Lilizela Ministers Overall award 2016 by the Department of Tourism South Africa?

I was not expecting this award at all. I was so happy in the manner which my country honoured me. The attention I received after that, made me feel proud to be a South African artist and I am glad that you came in to interview me in IsiNdebele. It was difficult to understand all the journalist/radio station who were there to hear what I had to say about this once in a lifetime award.

Tell us about your art school.

I have always had the calling to teach the science and significance of the Ndebele painting, and why we paint. Over the decades it has become my goal to preserve my cultural heritage. I built an art school in the backyard of my home in Mathombothiini (Weltevreden) in the Kwamhlanga district in Mpumalanga Province.

I have been funding the school myself. When I am not travelling for exhibitions, I still spend most of my time mentoring young artists in the traditional style of Ndebele design. I teach mostly young people and elders how to mix pigments and paint straight lines, free-handed and without sketches, using their fingers or chicken feathers.

We paint walls, portraits, canvases, ornaments and all types of objects. We also do crafts. My students want to be like me one day and have the opportunity to paint big brand cars, wine bottles, shoes and clothing labels etc.

Esther Mahlangu: I have always had the calling to teach the science of the Ndebele painting Click To Tweet

What is your first love, what you think about when you wake up every day?

To tell you the truth, I always wake up looking forward to maintaining my school and following up on my art pieces and finding ways to renovate my house, guest house and the art school. It is slowly deteriorating and I no longer have the energy and funds to maintain it myself.

Yet everyday, I feel there is something new and unique I can try out to keep this place alive for my community and for those who visit.

Isaac Makwana, my grandson and manager arranged everything together with a young lady who volunteered to do my PR. I was happy that the Municipality of Nkangala, Ikwekwezi FM and DS Moroka municipality supported me. I got many gifts from the communities and local businesses. My family, the Ndebele cultural group, and the Ndebele Kings and wives, as well as my good friend “Queen of Ndebele music” Nothembi Mkhwebane were also present.

Which projects are you currently involved in?

I want to be seen as a proudly South African business and brand that sets the tourism standard in traditional and cultural art not only in our country, but also globally. I want to contribute to South Africa’s image and history in the creative space.

What is mostly important to me is to have formal educational schools and facilities teach African art. That is a dream I am building towards.

What should we expect form you in the next coming years?

It is my passion to transfer this skill to the generations after me. I want them to learn where it comes from, why the Ndebele people paint their houses and monuments and how we made the paint from our natural resources such as soil.

The legacy I want to leave in this world is the art and crafts that has made me the recognised icon I am today. I am humbled by my community for the support, gifts and participation at my school, even though it is now old and deteriorating.