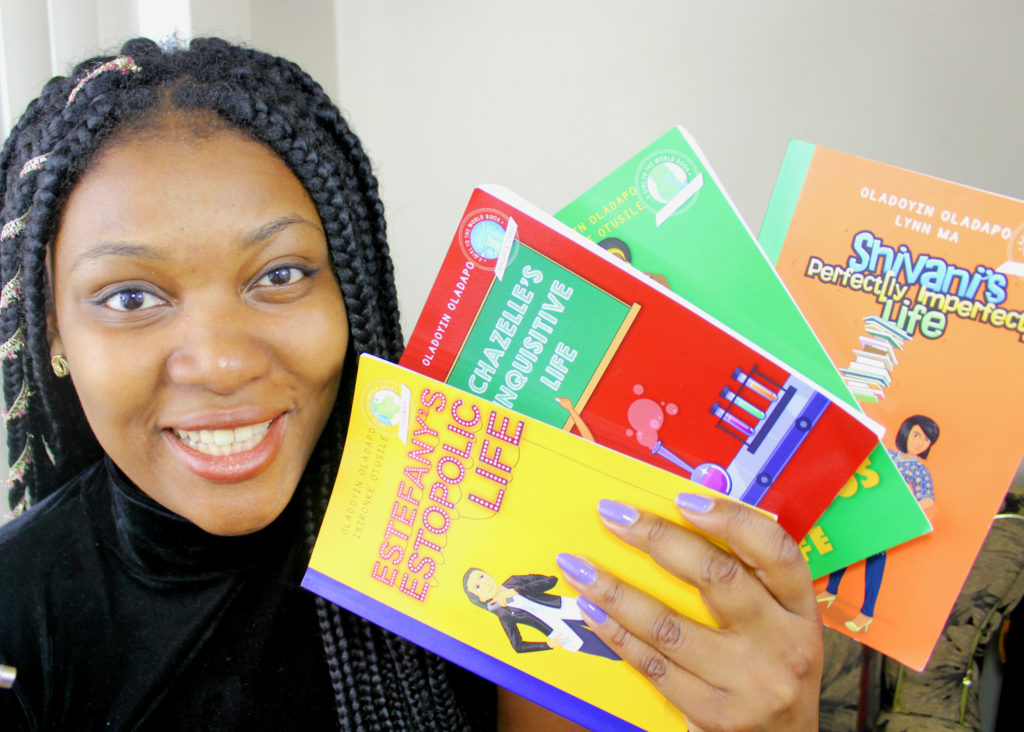 Oladoyin Oladapo is the author of the “Girl to the World” book series which consist of four chapter books and four picture books for children below 12. These books share values essential to girlhood; intelligence, curiosity and self-esteem while highlighting the diverse world around us. They are more than learning about differences instead, they are fun and captivating to read like traditional children’s stories.

This is because after spending six months in a local elementary school with her team, Oladoyin discovered that children that age are not as concerned as we were about learning about developmental concepts such as culture and values. So if her team wanted to get children to read, they had to mask all the educative material with fun and exciting stories.

This led them to create the “Girl to the World” book series which empower children but are still fun to read. The series teaches children but not are not textbooks. Oladoyin believes that the content children consume at this age moulds their future; her goal is to expose children especially girls to different cultures.

Read on to find out how Oladoyin Oladapo is helping girls reach their maximum awesomeness through the celebration of culture, girl power and universal concepts like arts, friends, family, fashion, sports and school.

Tell us a little about yourself and your writing background?

I am from Nigeria but live in the USA. My family migrated to the States when I was very young, so that was where I had most of my education. I studied sociology with education concentration and political science with international relations concentration.

Around my junior year, when I first got the “Girl to the World” idea, I was studying gender and inequality in education and I think that a lot of that really formed the idea. I however planned on making multiple things with the idea; thus toys and animation etc. The first prototype I made with this idea wasn’t a book. I had to try out other things until I finally decided to start with a book, which was a great idea I must say.

With regards to my writing background, I never had professional experience in writing. But I was always doing creative writing among others in school which gave me some experience in this field. So when the time came to write the books, what I did was to put together what I knew and I guess I did the best that I could.

You said you and your sister read a lot when you were young, which books had the most impact on your life? Would you say reading so much at a young age ignited this passion to write the Girl to the World series?

My sister and I read a lot, I remember reading the Bible a lot when I was growing up. At that young age however, I wasn’t able to understand the Bible so I was given the picture Bible which made it a lot easier to understand.

In terms of actual storybooks, our dad would take us to the library all the time. We spent an entire summer reading Chicken Soup for the Soul. I mean we read the entire series of that book just like the Babysitters Club, the Magic Treehouse, Junie B. Jones  and Captain Underpants series. I really enjoyed  Captain Underpants because it was an easy read and I loved the pictures and how funny it was.

Also I believe that because I read so much, I had the confidence that I could write the book even though it was something I never planned on doing.

From your Youtube video, you stated that there are four chapter books and four picture books about four amazing girls. These girls are Akua from Ghana, Shivani from India, Estefany from Colombia and Chazelle from Trinidad and Tobago. How did you come up with these characters and how did you choose their nationalities? Was is random or planned?

Everyone wants to know why I don’t have a Nigerian girl. It’s a long story. The thing is, the first person who joined my team was a Ghanaian girl who helped me write the first story. And later, when we decided to extend to other characters, we wanted geographical diversity.

It didn’t make sense to have Nigeria which is like two doors from Ghana. I wanted to get other places around the world. Ghana was already there so I decided to hold on with Africa and try other continents.

Then I decided to choose countries that I felt like I knew enough to write about. As I am an outsider and not from any of these cultures so I did research and talked to people who are from there. I wanted to make sure I had enough resources, facts and details so I could write about them.

I wanted it to be authentic, genuine and good. That was the major reason for creating stories from different regions. Also these were cultures I really really enjoyed.

I feel like if I wasn’t a Nigerian, I will be Indian. All these countries I was exposed to, I felt like part of them. With each character we wrote about, I felt like I was the one in the story. As a Nigerian, I have lots of Ghanaian friends and I am used to their culture so I chose cultures that resonated with me. However, these characters are just the beginning. I plan to extend to all the other cultures. 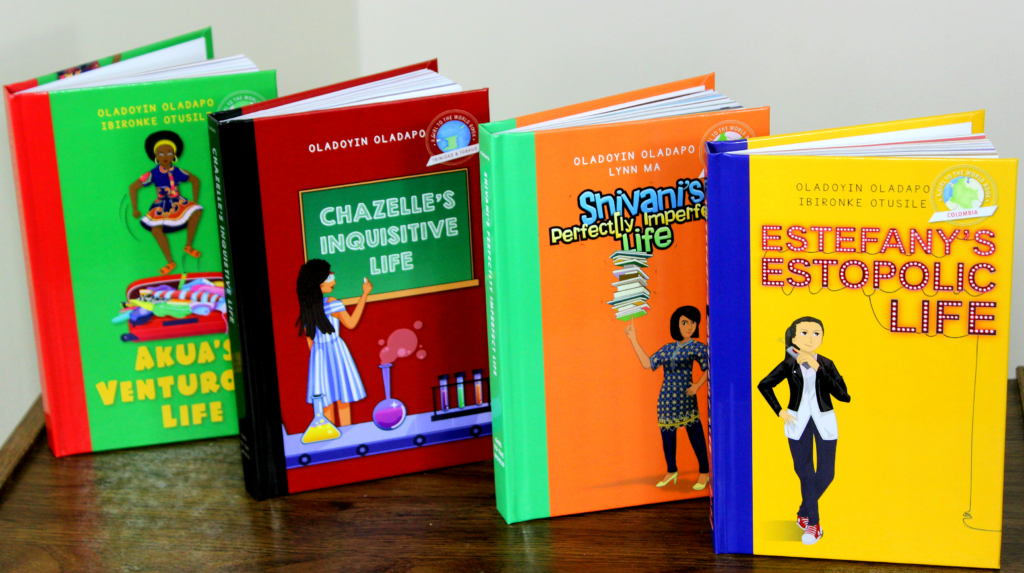 You and your team spent six months in a local elementary school to study and test out your contents. Can you share with us some of your findings?

What I learnt was that children just want to have fun and want to be engaged first and foremost. When I was serving them lunch, I would observe the things I did that got them excited. At the end of the day, I didn’t want to make textbooks.

We know that it is good for them to read things that will educate, inspire and inform them about other cultures, but they don’t know that and they do not care. Thing is, they don’t need to care because they are 10 years old.

If we want them to learn these things then we have to make sure to create something that would be exciting, informative, relatable, fun and easy for them to grasp. I think my problem with the books out there is that they don’t have that.

If you should read a book about a girl from Ghana, what you will find is; “Hi, I am Akua from Ghana. Ghana is a country in Africa. Africa is a continent”. That is true and nice but that is not fun to read. Older people can read that and be all right with it but imagine a 7-year-old reading that. It is just not going to stick.

So we decided to write out all that we wanted to do and teach. Then we had to brainstorm on how to mask them underneath the fun; so that the children will enjoy the books but also be educated.

For instance, we wanted to teach kids about entrepreneurship so we talked about how Akua who lives in Cape Coast, Ghana spent her holidays with her aunty in Makola Market Accra. She gets bored and ends up creating something out of some old Kente then sells it in the market. But we never mentioned the word entrepreneurship even once in the book.

However, we stated the qualities and skills of an entrepreneur. We wanted children  to understand the essence of creating something on their own. Even if you are not from Ghana, you know how you can be so bored during the summer. So we wanted them to know they could create something and make money during this period.

What makes these four girls and their stories so special?

Their diversities and the fact that they are just like us makes them so special. Diversity is not just about skin colour, it is about experiences and having different stories to tell; that is what we are capturing.

Growing up, there weren’t many books with characters that looked like me or experiences similar to mine or the woman I was becoming and we wanted to change that. We decided to create books children would relate with. So I sat down with my team and we really broke it down according to what we want the girls to be exposed to and we came up with diverse characters.

We had one girl who was interested in science, another interested in politics then one who was really loud and the other an introvert. We had to make sure that we had girls who had afro, straight and curly hair. This is supposed to be relatable to all sort of people since we were looking at diversity and different kinds of personalities.

These books are also special because they;

All these are embedded in every single story created. When girls read the books and see girls like them from across the world, they will think about being leaders and savour their culture and history.

They will view themselves not as superheroes or princesses but just as regular girls with lots of potential to offer to the world.

Among the four girls, which one is your favourite and why?

I really hate this question but I think Shivani is my favourite because she is actually me. The thing is I didn’t realize the similarities until I finished writing. Except for the fact that she is Indian, this girl is actually me.

Shivani is into student leadership and has a lot of activities in school. She is into fashion and she is a boss lady. Shivani is also structured, rigid and predictable. She had to learn to be a little spontaneous; something I also had to learn to do over the years. She was faced with some experiences where she learnt how to take life as it comes.

Who are your target audience? Which age group can read this book?

I however think that the older you are; the book series is a quick read. I also have 15-year-old and 16-year-old reading it.

What was the hardest and easiest thing about writing these books?

The easiest thing was actually gathering the information while the hardest was the writing, editing, formatting, illustration then the publishing.

When you finish a book, you have to go through this entire processes before publishing it.

Oladoyin Oladapo: When you finish a book, you have to go through many processes Click To Tweet

After publishing, how were the books received? How and where are you selling the book?

Reception has been overwhelming and people have been very supportive. Everything has been going a whole lot better than I expected, which is burning me up and I have to catch up to the wave. We have been shocked by the amount of support we have received. I don’t have any complaints.

We already distribute to three schools and have 200 other smaller distributors. The books are also available on Amazon, Barnes and Noble booksellers, through me and some book stores depending on where you are located. We are also trying to get the books on other distributors at other countries.