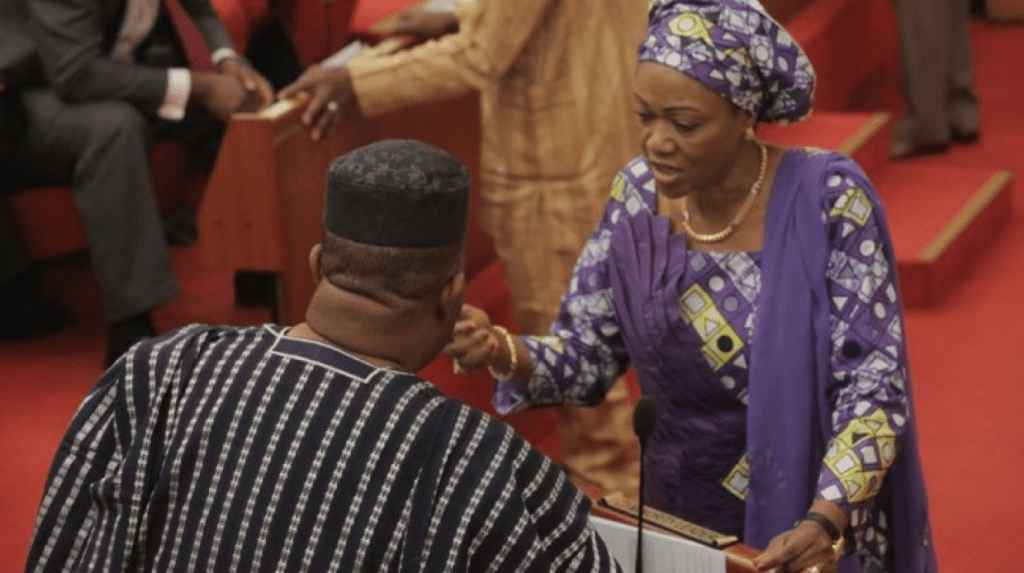 “I will beat you on this floor, rape and impregnate you and nothing will happen”.

It’s totally understandable if you need a break after reading that. We were shocked and shaken, and understand that others may be triggered. That these words were spoken by a Nigerian politician, in the chambers of the Senate, towards a fellow senator just makes things even more disturbing.

This isn’t the first time Senator Dino Melaye has been embroiled in scandals, usually around him being horrible towards women. His first wife, Tokunbo Melaye reported that he had physically assaulted her and posted bloody photos online to back her words. Similarly his second marriage to Alero Melaye was marred by allegations of abuse and was short-lived. And it doesn’t end there, in a bizarre move earlier this year Melaye criticised Governor Adams Oshiomhole for marrying a Cape Verdean woman rather an a Nigerian one.

The situation in the Senate

It’s clear that Melaye is not the greatest fan of women. Knowing his penchant for unruly behaviour, we have to ask how he has maintained his influential position in politics. Given his background, perhaps it’s not surprising that he verbally assaulted and threatened Senator Oluremi Tinubu while she addressed the senate a few days ago. Here’s what senator Tinubu said;

“I think [Melaye] needs to know that every senator here represents their constituencies. And that there is no need to threaten anyone. We are seeking and working towards reconciliation, yet you are busy issuing threats.”

In the Senate, senators usually address their peers, this is standard and is usually accepted calmly. Yet Melaye grew so infuriated with senator Tinubu’s comments that he charged towards her and had to be held back by other senators. To us, it looks like he reacted this way because a woman called him out. Both senators belong to the same political party and work together in the same space yet it’s clear that Melaye has zero respect for his colleague.

While this story has been shared all over the media, a number of newspapers are calmly overlooking Melaye’s threat of rape thus reducing the sexualised nature of his threats. Not surprisingly, Melaye has denied his comments and has claimed that he was provoked. Then again, the news reports we’ve followed showed that the media are either showing Melaye’s excuses or senator Tinubu’s husband’s words of support. We would like to know senator Tinubu’s side of the story.

We are frequently reminded that Nigerian politics is not a safe space for women. Even outside the halls of power, women politicians are often described as obnoxious or rude by the general public. Some people just aren’t comfortable with women in this field. Clearly, this needs to be remedied but Melaye’s outburst just shows that we still have a long way to go.

Some may be quick to point out the uncouth nature of Nigerian politics when discussing this matter. But what stands out to us is this; no matter how accomplished a woman is, she will still have to deal with blatant sexual harassment. Also pertinent is how nothing concrete is being done to deal with it.