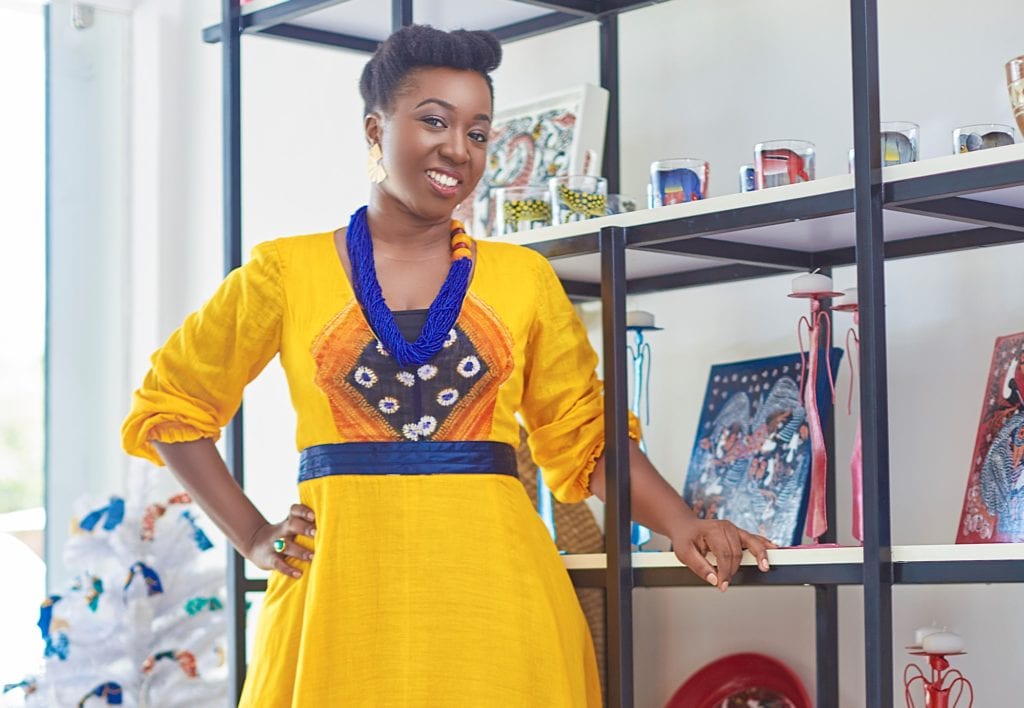 Senanu Arkutu: The high quality is here in Africa but you have to do quality control Click To Tweet

Senanu Arkutu is the founder and CEO of DAAR Living, an interior styling firm that is diversely African, layered and interwoven, antique and contemporary, with European and Arab influences.

While pursuing a career in Reproductive Health and International Development, she realised she had a flair for interior design after decorating her own home. Spurred by the compliments she received, she gave up her day job and opened DAAR Living in 2013.

Senanu is also the set designer for the hit series, An African City. Her flagship store opened November 19, 2016 in East Legon, Accra, Ghana.

How does one switch from a career in international development to interior design, and what transferable skills have helped you in your new calling?

Hahaha! It was time for a change after a 12-year career —that I loved, by the way. I decided to follow a passion that I had not realised was also a skill until I designed and decorated my own house, and the warm compliments started coming.

Transferable skills from a career in sexual health and family planning, I find new ones every day! But the most important one to date is listening to client’s concerns and finding an appropriate solution that is sensitive to their specific needs and feelings.

You’re Ghanaian but grew up in Southern and West Africa, which obviously have influenced DAAR Living. Where else do you draw inspiration from for your décors?

…And East Africa where my personal style probably leans towards. I draw inspiration from my mum, my clients, other designers, art and culture, trends, life.

What have been your highest and lowest points since starting DAAR Living three years ago?

The highest and lowest points all come together in establishing our first store.

I hired an established design and construction company to carry out the design changes I wanted done to the retail space. This was a team that the landlord was comfortable with as they had done some work for another retail space in the same building, which I had seen. The experience was a disaster. They were rude. Communication, follow-up and quality control were terrible and on top of that, a four-week job took them four months to complete! My rent money just went to waste (Accra landlords insist on two years rent upfront whether you are a start-up or not).

The highest point was the night I laid out and merchandised my store for the first time and went outside to see what it looked like from the shop window —I had a moment! With a physical space all done up as I wanted it, and DAAR Living signboard up in lights, it suddenly seemed like DAAR Living finally actually existed.

In an interview, you voiced your desire to see African arts and crafts showcased in other ways besides a market setting or market style setting. Would you mind elaborating?

I would love to see more of quality African art and crafts being showcased in all their glory in a contemporary retail, gallery-like space, and not always in a busy market where it is not easy to see the skill and beauty of the piece. You do not see this often in Ghana or the rest of the continent, except in South Africa and, now, of course, Alara in Lagos.

The new DAAR Living store aims to be the contemporary retail space showcasing African functional art and craft in Accra. We want to be front and centre in this emerging story.

You’re the principle set designer for the hit African series, An African City. How did you get the deal for the show and end up collaborating with Christie Brown, who designed some of the beautiful clothes on the show?

Nicole (creator of An African City) and I are good friends. We believe in each other’s work and see the value and strength in collaborating. I offered my house for use in season 1, and by Season 2 the AAC team had realised the added value of set design and how it plays a large part in story-telling. DAAR Living was better established by then, but there was no budget allowance for set design, so Nicole turned to me and Nana Spio-Garbrah of Blueprint Africa (Assistant set design). Of course, we were glad to help Nicole, and there was also the added potential exposure An African City could give.

As for collaborating with Christie, when I began DAAR Living I wanted to launch a brand and begin building it and its community immediately. I knew that the products and services on offer may change slightly, several times, but the concept was clear and would remain the same. As a client and lover of Christie Brown, I could not get out of my head how pieces of mine reminded me of outfits of Aisha’s (founder of Christie Brown). So I called her with an idea for an exhibition that brought interiors and fashion together to launch my brand and she loved it! She encouraged me, offered her then new flagship store for the launch, and the rest is history.

How does DAAR Living ensure on-time delivery and high quality across all its offerings, especially since décor and furniture pieces are sourced from across Africa?

Good question. The high quality is here in Africa but like everywhere else you have to do due quality control. This is my job and it takes a lot of back and forth but we get there.

For on-time delivery, firstly, I do not offer items for sale that are not already ‘on the shelf’ —online or in the physical store. Secondly, if a client is making a bespoke order and I think it should take two weeks, I have learned to double the time duration. This way, I am always on time and often early which is always a joy to customers.

DAAR Living lays a heavy emphasis on colours. If you were to choose a colour that represented your company, which would it be and why?

It’s impossible to choose one. Probably, it’s the reason the DAAR Living logo is black and white with clean, simple lines. The backdrop best highlights all the diverse colours, art-forms and cultures of Africa.

What does the future hold for DAAR Living?

Many wonderful things all leading back to my development background of improving livelihoods.