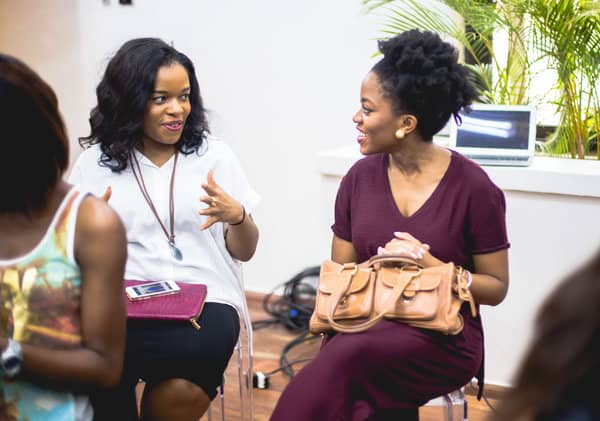 We’ve all heard the phrase “Your network is your net worth.” And though, it may seem like one of those cheesy phrases that’s only appropriate for fridge door magnets and tacky self-help books, its 100% true. For young entrepreneurs like us, networking is especially important for a couple of reasons:

There are a number of different ways to network but today, we’re going to focus on how to #WIN at a formal networking event. Formal networking events are tough for us because both Afua and I are true introverts. So, even the thought of having to spend an evening talking to people we don’t know exhausts us. That said, sometimes, it’s got to be done. So, it’s best to be prepared.

Come with a game plan

You’ll never have a chance to speak to everyone, and if you’re able to preview the guest list before hand, come with a clear list of the people you’d like to speak to. If Afua and I are going to a conference, we’ll do more than come up with a target list. We’ll also prioritize the list so we have people who we MUST connect with vs. people who’d be nice to chat to.

Once we have that list, we create a spreadsheet with these key pieces of information.

1. A few points on the person’s background

Knowing a little bit about them will make it easier for you to strike up conversation. I was at a conference two years back and really wanted to meet the CEO of a large African bank. I did a bit of research and found out that he’d given a really interesting talk on Gender Equality. So when I went up to introduce myself to him, I opened with

“Hi Mr. X, my name is Yasmin. I watched your talk at XYZ about gender equality and found it so inspiring.” And on the conversation went.

It’s important to be clear (if possible) on why you’d like to talk to someone. It helps you steer the conversation in the right way and tailor your pitch appropriately.

PS: This isn’t being disingenuous. It’s just understanding that people care about different things and so making sure that you’re emphasizing the part of your business that they’re most likely to care about.

Hang out by the food table

If you don’t feel comfortable introducing yourself to people, try hanging out by the food table. Food is always a great conversation starter. If you see someone picking up that lovely mini cupcake you just tried, go up to them and say,

“Those cupcakes are absolutely amazing. You should definitely try one. O … I’m Yasmin by the way. Nice to meet you. What’s your name?”

And voila! You’ve struck up a conversation in a non-awkward and relaxed manner.

Most people think that networking is all trying to impress people with your amazing accomplishments. But it’s just as important to listen to other people and try to learn more about them. Not only is it polite but the more you learn about someone, the more likely you are to find interesting ways that they could be helpful to you and your business.

I was at a conference once and struck up a conversation with a guy who worked in PE – his deals were all Europe-focused so there wasn’t that much in common with SLA. But after chatting for a few minutes, he mentioned that his wife sat on the board of an organization that we’d desperately been trying to reach out to! Now, you see if I’d spent the whole time blabbing to him about myself, I may never have found out about this awesome connection.

Go for the number 2

Here’s a scene I see at networking events all the time. Important woman or man arrives and everyone swarms him/her, jockeying to get a word in, shoving cards in his/her face, begging for his/her card. Important man/woman is overwhelmed, a little uncomfortable and frankly doesn’t see individuals, instead he/she just sees a mass of overly eager faces.

When this happens DO NOT join them. Here’s a little trick I’ve learnt. Look around for the people that this person arrived with. It might be a chief of staff, a PA, a family friend or just a friend. Target that person. Why you ask? Because that person is waaaaay more accessible than important man/woman and yet they have access to important man/woman.

So there you have it! A couple of short tips to help you become ace your next networking event.