To succeed in the legal profession, confidence is key.

Whether it’s arguing an application in court, explaining to your boss why you should adopt an unorthodox approach in dealing with a client or trying to secure a client – confidence is needed to achieve success in the legal profession.

After practicing law for a while, you will have attained a certain level of confidence. The experiences you have gained in the field and the mistakes and lessons you have picked up will build your confidence.

However, a young lawyer who is just starting out in the field or who has little years of experience may struggle to gain the certain level of confidence needed to deliver results.

In my few years of practice, I have had to innovate and think of ways to build my confidence. Along the years I have picked up these 3 vital lessons:

Over the years, I have come to realize that thorough preparation for any task or activity, has helped me in my few years of practice. Be it a client meeting, arguing an application in court, or going to trial and so on.

When you are thoroughly prepared to carry out a certain task, you will have the confidence to convey your point or secure a client regardless of how apprehensive you naturally are or unexpected twists that occur when carrying out the task.

For instance, if you are arguing an application in court, or pitching an idea to your boss or trying to secure a client in a novel filed that you have no real practical experience in, it is advised that you prepare extensively.

This will involve reading and practice your arguments, cases, studying in depth and any other relevant information.

Imagine you are having a conversation with your friend

I personally think this is an off-shoot of the first point discussed above.

If you’ve done your homework, it should not be difficult to convey your submissions or points. However, if the client or the Judge may be cantankerous or erratic, you would probably have some fear when addressing them.

One way to deal with this is to imagine that the person in question is your friend. Think of how you would explain the case or hold a regular argument with your friend.

This attitude will help relieve whatever fear or apprehension you have. You later realize that your points come across much more clearer and eloquently. Also, it will help you deal with whatever unexpected questions you are asked.

This is the most important point. If you are well prepared but don’t believe in yourself, it will show! The impression you will create is that you are actually not well prepared.

Take for example you are scheduled to argue an application for an injunction in court. You have studied your client’s case well and the relevant law on an injunction. If you aren’t confident and the Judge interrupts you questioning, “Why should the Court grant your Client this injunction”? Your thoughts will be jumbled up and you may end up confusing the judge.

The truth is you probably know the answer to this. You just need to apply the law to the facts explain how the law favors your client. However, if you do not believe in yourself, you may begin to overthink the question being asked. Then you’ll start talking too much till you go off point.

In summary, you have to believe in your self and your case. Even when you have a bad day or have received a bad review!  Naturally, when such events occur, your morale is down and you lose all motivation to continue working hard.

If you believe in yourself, you should not let this affect your productivity. Instead, you should use such negative comments to fuel your energy and motivate you to perform better.

Do you have career tips on how to build confidence in a given industry? Let us know here. 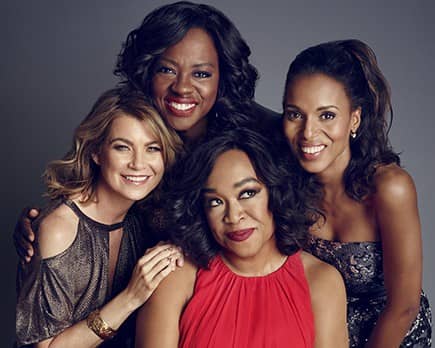 Unless you have been living under a rock, or generally lack interest in everything pop culture related, you’ll have seen or heard about one of these shows: Grey’s Anatomy, Scandal, Private Practice or How to Get away with murder. The brain behind all of these television gems is Shonda Rhimes, the most powerful woman in television. She’s the first African American woman to run three consecutive shows on television’s most expensive real estate: Thursday night.

More than being an incredible writer, Shonda is also an example of what it means to be a badass leader and how to turn your dreams and aspirations into reality. She wrote a book recently called ‘Year of Yes’ and it is not only incredibly moving and hilarious. It also teaches many lessons about getting to the top in your respective field.

Here are 5 lessons from Shonda and her incredibly written female lead characters: Annalise, Olivia and Meredith.

Annalise Keating – Think on your feet

For those who follow HTGAWM (How to get away with murder), if there’s one thing we can learn from Annalise it is the ability to think on your feet. She is the fast-talking attorney on the show and is quick to come up with arguments to defend her clients. She ultimately created the twisted story that let her students get away with the murder of her husband.

Though a bit dirty and twisted, I still think there is a lesson here. In whatever field you are in, immerse yourself in it, so that you can draw from different aspects when you need to. Annalise knows the LAW. Therefore, she knows how to get around it and make it work for her.

You want to be an entrepreneur, but do you know the rules of the game? When you find yourself in a difficult situation, it’ll be those moments you had invested in knowing your craft that will get you through. Do the work, and when you do, be better than Annalise, and use it for good.

Olivia Pope – He is not the sun, you are

Arguably one of the most drawn out love stories in television history took a turn for the crazy when Olivia moved into the white house to be Fitz’s girlfriend. For those of you who don’t understand why this broke all of our hearts, it would be the equivalent of President Clinton moving Monica Lewinsky into the White House as his girlfriend at the height of the scandal. Yes, it was that crazy.

Although there is no doubt that Olivia loved Fitz, what became clear as she lived out the role of First Lady was that it was not who she was and she had the courage to do what she knew she had to: end it and move out.

The truth is, sometimes love is not enough. Your life goals need to be aligned with your partners, otherwise you will be betraying yourself. He is not the sun, you are!

We need to internalise this to be the Motherland Moguls we can be. There will be times when you will have to make sacrifices, but you should never have to sacrifice yourself. Remember that .ladies, and choose wisely. (Preferably not a married president like Olivia. Let’s try to keep it drama-free.)

Meredith Grey – It takes a Village

The saying ‘no man is an island’ has taken on new meaning as I have spent the past 11 seasons watching Meredith Grey go through all sorts of heart shattering life events in Grey’s Anatomy. Most recently (spoiler alert), she gets attacked by a patient and loses her hearing and her ability to move for weeks. She has 3 small kids! How will she survive? The answer is simple: she has a village of people who will do whatever it takes to look after her.

As I wiped my tears watching all of her friends step up to look after her and her family, I was reminded of how she did the same for each and every one of them at a different time. It makes sense. We cannot rise to the top alone, we need to realise that the people around us have a serious effect on our ability to reach our goals. Get your immediate circle right. And the best way to do that is to be the type of friend you wish you had.

This will heavily pay off in the future. Life is full of uncertainties and we cannot control what will happen. All we can do is put ourselves in the best position possible to deal with whatever life throws at us, and a huge part of that is the people you can call on no matter the situation.

Do you have those people? If not, are you that person to anyone?

From creator, Shonda Rhimes – Dreaming is for losers

This point for me was very difficult to internalise. I am a dreamer, it is in my blood. The phrase: ‘dream come true’ is featured on my blog over a gazillion times. Shonda as the badass leader that she is really burst my bubble on that one. The people who get things done are not the dreamers, they are the doers. Shonda explains:

‘I wanted to be Nobel Prize-winning author Toni Morrison. That was my dream. I dreamed and dreamed, and while I was dreaming, I living in my sisters basement (FYI dreamers always end up in a relative’s basement). I actually couldn’t be Toni Morrison because she already had that job and wasn’t planning on giving it up! One day I read an article that said it was harder to get into USC film school than Harvard business school. I could carry on dreaming or I could do. At film school, I discovered an entirely new way of telling stories… a way that flipped this switch in my brain. Years later, I had dinner with Toni Morrison. All she wanted to talk about was Grey’s anatomy. That never would have happened if I hadn’t stopped dreaming of becoming her and gotten busy becoming myself.

Rather than spending time dreaming about how we can be like the amazing women we admire, let’s get busy becoming our true authentic selves and doing things to bring our dreams to life. If you want to be an actress, rather than dream about it take classes. Are you putting yourself out there? If you want to grow your business into the world-dominating company, are you taking the necessary steps to get it there?

And lastly, a point from me.

Seun Awolowo- Be your own reference point!

There doesn’t have to be precedence for your idea or career path! No one knew a show with a diverse cast would last but Grey’s Anatomy is going on 12 years. There hadn’t been a black woman as the lead character on television since the 1960s, yet Scandal is a hit.

You can start your own first! You just need the right attitude, and the correct Shondaland tools in your toolbox to make it happen.

Superwoman your way to badassery ladies! If Shonda can do it, so can you.

Ps: Badassery= new word meaning knowing, accepting, and celebrating your gifts, living life with swagger, and not caring what anyone thinks about you. Add it to your dictionaries! It’s in mine.