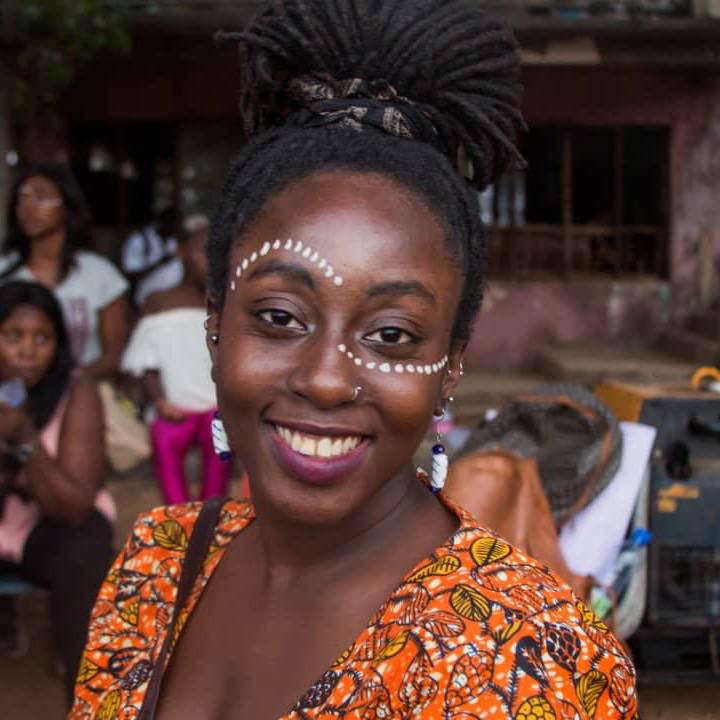 As an embodiment of all five, she believes in nurturing and stimulating young minds. Her philosophy is simple: no act of change is small; everyone has a role to play in their community.

This is reflected in her social business Ori from Sierra Leone or Ori which manufactures unisex shea butter-based hair and body products infused with essential and carrier oil.

This enterprise is set up mainly to support Girl Up Vine Club Sierra Leone where I serve as Founding Director since 2016.

Her educational background is in French and Global health and she has spent the past 5 years teaching in Sierra Leone. She has been involved in education, civic engagement, girl empowerment, and agricultural projects.

She speaks to SLA on her aspiration to expand Ori and grow Girl Up Vine Club Sierra Leone into a training center in West Africa for girl child capacity building.

What motivated you to become a social entrepreneur?

I didn’t actually plan or aspire to be an entrepreneur ever let alone become a social entrepreneur.

When I left the United States in February 2014 and returned to Sierra Leone I didn’t have a job.

After 3 months of job searching I found one at a school in June 2014, however, Ebola engulfed the nation and schools were shut down in July 2014 after a national emergency was declared by the then-president.

During those 9-10 months of schools being closed, what saved me was private tutoring. I did that throughout and in April 2015 when the emergency was uplifted I started searching for formal employment and got a placement to commence September 2015.

From September to December 2015 my tutoring “side hustle” grew and it surpassed my salary — it was then I took a calculated risk and decided to quit formal employment and grow this newfound business.

I registered my tutoring/translation business as Mina Bilkis & Co in 2016 and started catering to teaching adults in the evenings who work in NGOs, offices and it expanded to private tuition classes as well.

The form you have selected does not exist.

The proceeds of the tutoring business I reinvested in buying photography equipment and a camera (as I mentioned earlier, I love photography) and added the photography division to my business.

However, in early 2018 I decided to shut down productions for 9 months. Upon further research, I discovered that the name Karité was already trademarked. So I went back to the drawing board and in October 2018 Ori was born.

Returning to a harsh job market in 2014, this catapulted me into entrepreneurship, moreover living in such a astoundingly beautiful country yet endures so much pain and suffering and is victim to the paradox “resource curse”, I don’t see how one wouldn’t want to help and build your community in your own way.

Tell us about your work with Girl Up Vine Club, and how it is impacting communities in Sierra Leone?

We aim to promote the health, safety, leadership, and education of adolescent girls in Sierra Leone through community outreach, advocacy, and public speaking workshops.

We meet once a week for 90 minutes and discuss a topic of the week outlined in our monthly curriculum.

Our topics stem from social issues ranging from mental health, peer pressure, self-care, health and body rights, and feminism. Every year the new girls (who get inducted at the start of every year) are given journals to log in their thoughts and are given assignments on a topic discussed or are asked to research new words or expressions.

As English Language and speaking is an underlying issue for many, we do English classes often to strengthen their Grammar and Vocabulary so they are able to facilitate workshops or speak in public confidently in addition we offer internal public speaking and self-confidence building sessions.

So far, our beneficiaries have facilitated workshops in Kambia Port Loko, Moyamba and other parts of the country sensitizing, educating and engaging different communities in the scope of our aforementioned projects.

Do you have success stories of the girls that you’ve mentored so far?

In my 2018 Tedx talk entitled “Creating Safe Spaces in the Global South”, I highlighted my work at Girl Up and our success stories and our beginnings and mentioned the following girls:

Suad Baydoun served as the first President of Girl Up Vine Club Sierra Leone. I met Suad in October 2015 at the US Embassy when I was co-facilitating the International Day of the Girl Child.

She was actually the reason why Girl Up was launched at her school. She was a Junior Secondary School student at the time preparing to take her middle school exam: Basic Education Certificate Examination (BECE) that upcoming academic year.

Three years she has blossomed to socially driven and motivated young woman. She has now taken her West African Secondary School Certificate Examination (WASSCE) waiting for her results to go to university.

She has founded her own safe space for girls at her senior secondary school — St. Joseph’s Secondary School and she is a TV presenter.

Mariam Jalloh was very timid and withdrawn when we first met three years ago and wasn’t academically strong.

She graduated as the highest-ranking student of her year and was also selected as class prefect. She aspires to study Accounting in university next year upon her WASSCE results.

She currently serves as our Co-Program Coordinator and Teen Advisor at Girl Up Vine Club Sierra Leone.

What are some challenges you faced while growing your vision for the organization?

To impact change — long-lasting and sustainable change it doesn’t come easy and anything easy I tend not to want (haha).

Nothing good comes easy I believe but sometimes you can also become fatigued by not seeing the fruits of your labor manifest sooner than anticipated.

A challenge starting Girl Up was deconstructing what girls have been learned and taught their entire life — which translates in the way they speak, think about/perceive themselves and surroundings and the way they interact with one another and loved ones.

Wanting to unlearn something as an informed person is one challenge, but educating others on how to is a different ballpark and that was a challenge at first in growing my vision and molding Girl Up Vie Club Sierra Leone.

There is no right or wrong way or answer to combat this and I am not someone who is easily defeated so I persisted and continue to persevere. I myself continue to unlearn toxic societal “norms” and patriarchal stratification.

What helps me is surrounding myself by like-minded people I can express my grievances to, laugh with and I partake in guided meditation sessions and do yoga to recharge and recalibrate myself.

As an organization, we learn and grow together so when we hit these hurdles in regards to

Identity isn’t stagnant, it’s dynamic as are human beings. We evolve. I have evolved and grown and will continue to do so – @MinaBilkis Click To Tweet

Do you have role models that have influenced your journey?

I would be doing my entire existence a disservice if I do not start with my family. I owe my mindset, strength, and determination to my parents but most importantly my mother — Dr. Aisha Fofana Ibrahim.

My mother is a feminist scholar and activist who teaches Gender Studies at both the undergraduate and masters level at Fourah Bay College (FBC) – University of Sierra Leone (USL).

It is with her love, encouragement, and support I am who I am and do what I do. So my mom has played an exponential role in my journey.

Outside of my family dynamic, I would say Chimamanda Ngozi Adichie. I am her secret child she doesn’t know about. Chimamanda is fearless and speaks her mind unapologetically (even if it is deemed “controversial”). I like that.

I also adore Oprah Winfrey. Always have as a child. She is the epitome of inspiration and motivation. I admire her business mindset and when I have my Ori and Mina Bilkis cap on, I say to myself “What would Oprah Winfrey do?”.

Also, I think of how she began her career and see how she has from TV and transcended throughout the decades and is relatable to all walks of life. I like that because I aspire to that.

Recently, I’ve been looking up to Rihanna as well. From a successful singing career to becoming a successful businesswoman with more to come.

Identity isn’t stagnant, it’s dynamic as are human beings. We evolve. I have evolved and grown and will continue to do so, therefore I like that about Rihanna. She’s unstoppable.