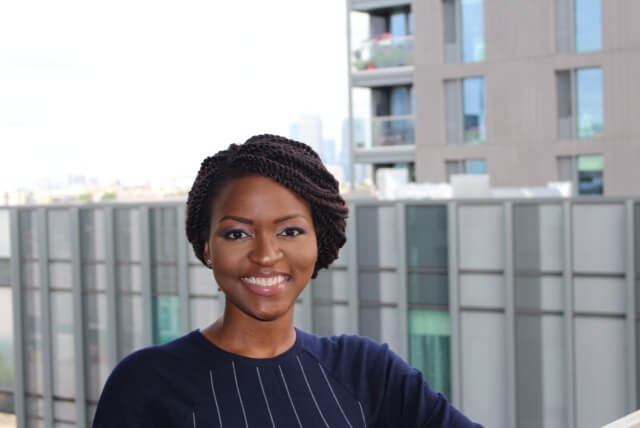 Gbemisola Isimi is the CEO & Founder of CultureTree and she wants children to learn African languages. We can’t ignore the importance of speaking your mother tongue(s) but in a globalised world, many children are losing touch with their languages. CultureTree provides a solution to this problem.

At present, CultureTree teaches children the Yoruba language through popular nursery rhymes, folk songs, stories, games and other educational resources. They plan to expand and introduce other African languages in the near future.

What would you say is the innovative idea behind CultureTree?

The idea for CultureTree was birthed when I had my first daughter who is now 3 years old. I wanted to teach her Yoruba but I couldn’t find anything online. I noticed she loved watching nursery rhymes on Youtube and could sit for hours watching it, even the ones in foreign languages.

So I searched for Yoruba nursery rhymes but there was only one at that time and it wasn’t an animated cartoon but someone singing. That was when I thought of creating them myself.

Kids love our nursery rhymes because they are already familiar with most of the songs. Baba MacDonald for example is particularly popular because kids love the Old MacDonald had a farm nursery rhyme. They are simply learning the Yoruba version of it.

We hope to make learning African languages a fun, interactive and natural experience. Children are more likely to be curious when presented with songs, rhymes, stories and games and therefore are more likely to learn and retain knowledge.

Can you tell us more about your business as a social venture?

As Africans, our language is a very important part of our identity. Yet I noticed that a lot of us (Nigerians especially) living outside of Africa no longer speak to our children in our mother tongue. Even those of us who do speak our language to our children don’t get a response from them in our language but rather in English.

This is because English is what we are surrounded with and unless parents have the tools and resources to help with teaching our languages, it will be a continued struggle (especially for those in inter-marriages, non-speakers etc.)

Our mission is to preserve and promote African languages and also reignite the love and passion for our languages. As I mentioned earlier, we hope to provide as much educational resources as possible to teach children African languages. We believe it is very important to catch them young because children are so intelligent and can learn multiple languages very easily.

As parents it is our duty to educate our children on our culture and language. If we don’t pass our language on to the next generation it will surely die. 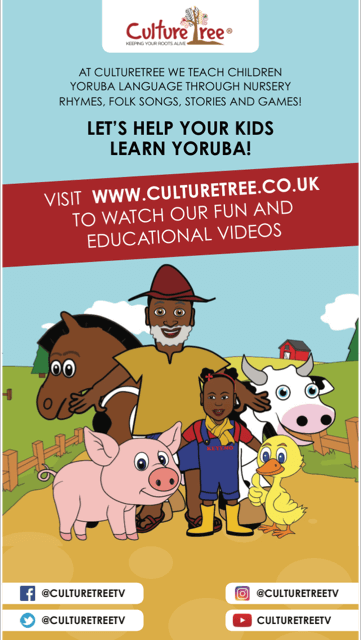 What four skills have you found yourself using/learning frequently since starting Culture Tree?

There are so many but the four that stand out for me are:

I’ve had to be very disciplined with my time, money, efforts, everything! Usually when working 9-5, you really don’t think about this because everything is so much more scheduled. As an employee you start work at 9, have your lunch around maybe 1pm then finish at 5/6-ish.

When I first started working for myself, I used to think, “Yes I’m my own boss now, I can do whatever I want, even sleep till 10am”. I’d start working around 1pm but before I could even type one full sentence, the day would be gone and I’d have achieved nothing!

Same with money, I can’t walk into Reiss and buy that expensive top any more without thinking about my bank balance because there’s no regular salary at the end of the month (at least till I hit the big-time).

To cut a long story short, I’ve had to apply self-control in everything and work out a routine that allows me to be productive.

I now set time aside each week to plan for the entire week and also make daily adjustments. I know when my peak energy times are so I work during those times and also keep a to-do-list.

I can get in about 20 words in one sentence because I talk very fast! And yes that is a skill! But that is not the kind of communication skill that has come in handy strangely.

We are surrounded by noise everywhere, in person, online, on TV, etc. People can easily switch off if the information you’re giving them is too much or too long. I’ve had to work on being able to express the idea of CultureTree in a clear and concise manner.

It is very important to learn to pick out the most important concepts of ones’ ideas and speak about them with clarity. I am also very enthusiastic about the business and I think this shows when I talk about it. If you are not enthusiastic about your idea, it is hard to persuade others to believe it is good one.

Learning is a skill and one should never stop learning! I’ve always been a quick learner but there are so many technical skills I lack that I want to learn. It is very important to be willing to learn new skills constantly.

For example, I’m learning how to create children’s games. I can easily hire someone to do this but it’s also useful for me to know how to do it myself, not to mention the fact that it’ll save me major mulla!

Also, being willing to learn from others and having the courage to ask for help when needed is vital.

What challenges have you faced that are unique to your business idea and target audience?

The main challenge would be finances. Anyone who knows anything about animation can tell you how expensive and time-consuming it is. I’m not an animator so I’ve had to hire skilled animators to do the work for me and chale it is very expensive! This is why I’m looking for investors. I’m really not about that ‘loan’ life.

The idea has been well-received by our target audience so this has not been a problem. We still get the odd comment of ‘learning an African language is of no use’ but these are few and far between and we don’t let the naysayers rain on our parade.

You plan to expand to include other languages, how are you preparing for this?

Yes we plan to include other languages but we are keeping these plans under wraps for now. Sometimes it’s best not to reveal all your cards at once.

In what ways have you diversified your product to suit your market?

When we started the YouTube channel, we had a lot of parents asking if we run any language classes for kids. This was definitely in our future plans but due to such high interest, we’re starting this sooner than we thought we would.

We’re currently putting things in place and will be starting our Yoruba Rhyme Time classes for kids in London early next year.

Some people are looking to learn their mother tongues as adults, what advice would you give them?

That’s how kids learn, through repetition and immersion. You don’t need to memorise flashcards or complete homework every week (I’m not saying those aren’t helpful) but the best way to learn a new language is to just listen, absorb and speak! Don’t worry about having a funny accent or saying words wrong, just speak it!