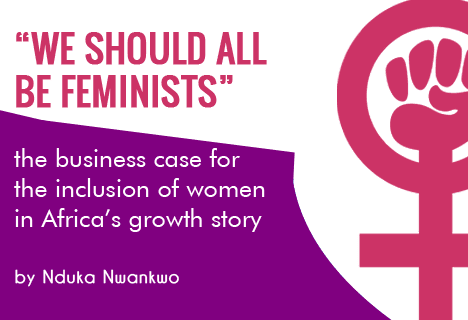 It is simply impossible to imagine Africa without its women.

However, as Africa has rapidly progressed, there has been a lack of proportional representation of women. Women are often missing in the narrative of Africa’s growth and are clearly underrepresented in governance.  The concepts of growth and governance are in many ways intertwined and key to a prosperous Africa.  To drive growth, Africa needs leaders with diverse skills, talents and backgrounds. Given women’s make up over 50% of Africa’s human capital, Africa can’t achieve any milestones without them. There are clear benefits for integrating women into Africa’s growth story and dire consequences for excluding them.

Economists estimate that Africa needs to grow at a rate of at least 7% per year to put a meaningful dent on poverty. While some countries are on track to meet this target, others are lagging behind. The Organization for Economic Cooperation and Development found that an increase in female labor force participation –or a reduction in the gap between women’s and men’s labor force participation—results in faster economic growth. Also, development economics expert Stephan Klasen found that gender inequality in employment negatively impacts growth in Sub-Saharan Africa— the continent directly suffers losses of 0.3% per year compared to East Asia due to this problem.

Fundamentally, the principle of economics tells us there are 3 key ingredients for economic growth: land, capital and labor. Economic growth is maximized when all of these factors are fully tapped into and being utilized. There is no nation in the history of the world that has achieved meaningful economic growth without engaging its female population.  Further, the Nike Foundation found that women reinvest 90% of their income back into the household, whereas men only reinvest 35-40%. Cross referenced, the data suggests that the path to sustainable growth for Africa is one that needs women at its forefront. Hence, governments, private sector firms and individuals need to make a conscious effort to promote female participation in building the kind of economy Africa deserves.

That said, Africa needs visionary and ethical leaders. Since gaining independence from colonial powers, many African countries have been ruled by male leaders (often dictators), and in that time we have not made meaningful progress. According to the World Bank, East Asia managed to reduce extreme poverty from 78% in 1981 to 8% in 2011. In South Asia, the share of the population living in extreme poverty is now the lowest since 1981, dropping from 61% in 1981 to 25% in 2011. Sub-Saharan Africa on the other hand, has only reduced its rate of extreme poverty from 53% in 1981 to 47% in 2011.

While one can argue that external factors have contributed to this reality, I emphasize that a large part of Africa’s failure to live up to its potential has been due to poor leadership.

Numerous behavioral studies have found women to be more trustworthy and publicly spirited than men and particularly effective in honest governance. A study by the World Bank Development Research Group found that higher rates of female participation in government are associated with lower levels of corruption. One can argue that these studies are neither all-encompassing nor conclusive. However, given that our current modus operandi has largely failed, I suggest we employ another approach towards the leadership of our continent – one that has more female leaders at the table.

The World Economic Forum Global Gender Gap Report shows Rwanda as being in the top 10 countries of gender equality globally. One area of particular strength is the political empowerment of Rwanda’s women. The country’s women hold 64% of parliament seats (highest in the world) and 39% of ministerial positions. Rwanda also holds the number 1 rank globally for female labor participation, where the country has more women than men contributing to the GDP (with a female to male ratio of 1.02). It is no surprise, then, that Rwanda’s economy grew by 7% in 2014 and is projected to grow by 7.5% in both 2015 and 2016 according to the African Economic Outlook. The success Rwanda has shown in engaging women in political leadership is a glimpse of what the rest of Africa can accomplish with more women at the table.

The business case for aggressively engaging women in the development story of Africa is clear— we simply cannot achieve growth without them. While there have been some bright spots, leadership has been poor. To realize our potential across every sector, women need to be engaged women at all levels. Women will not solve all our problems, but leveraging our most talented people—both female and male—promises to be the only sustainable solution.

One thought on “We should all be feminists: The business case for women’s inclusion”