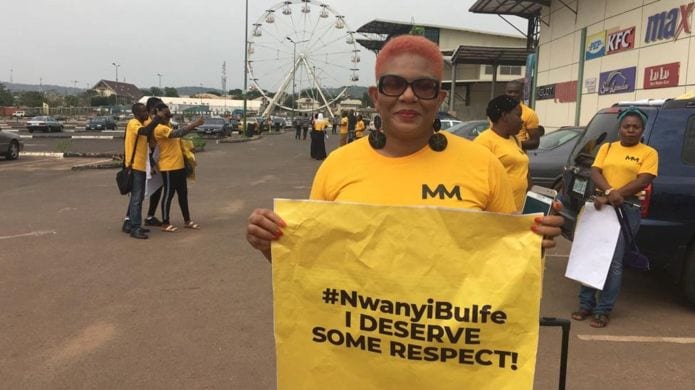 We March so that the girls who come after us can walk freely, and run without being chased.

If 2018 was a chapter in a history book, it could be titled The Year of Female Activism, and aptly so.

The #MeToo and #TimesUp movements raised awareness on sexual harassment in workplaces for women worldwide.

2019 was the year of Serena and the catsuit, and the Women’s March Anniversary.

It was the year that women in Saudi Arabia were legally allowed to drive, and even closer to home. It was the year Ethiopia and Rwanda and South Africa both named their first 50% female cabinets.

‘Good things arrive in multiples’, just as movements worldwide were being transformed from ideas to action.

…sounded like something straight out of a UN document.

The Twitter account – a creation of Brand identity designer Damilola Marcus, immediately blew up, receiving massive support from popular activists on social media, celebrities, and regular citizens who could either relate or at the very least understand why the Market March needed to happen.

Marcus, when interviewed previously, stated that her prior attempts to galvanize action from law enforcement officials on sexual harassment in markets, were met with the reply: It was not a ‘common problem’.

Going to the Market in Nigeria is sometimes a war. Your armor is comfortable footwear (for ease of movement), covered up clothes, (to avoid sweaty fingers) and if you’re a woman, definitely no short skirts, unless you have a ‘strong mind’.

Purchasers are often dragged, and upon resistance, insulted with sentences often chock full of sexual innuendo. And yet, it is not uncommon to find the traders leading a protest to our protest.

The first #MarketMarch took place in December 2018 at Yaba Market, Lagos.
Marchers then, just like us, were called prostitutes and lesbians.

Just like us, they were injured, manhandled, heckled, thrown at, cursed at, for protesting the rights of female to walk unobtrusively in a public place.

A journey time of 30 minutes is easily tripled once you factor in wait time in bus parks, constant stops, and roundabout journeys.

Nevertheless, I and three of my friends set out on a journey from Agbani -which for all intents and purposes is on the outskirts of Enugu- to Ogbete Market to participate in the Market March on Saturday the 23rd March 2019. With approximately 40 marchers, male and Female, indigenes and visitors, united by a common cause.

On my first trip to Ogbete, the tour guide proudly informed me that it is the biggest market in the State, abundant in all, and lacking in nothing – a shoppers haven.

The market march reached its climax at the clothes section of the market, populated by predominantly male vendors. One man called us Lesbians, and others then pitched in to deliver a fervor- filled ‘Holy-Ghost fire!’. Repeatedly.

All the while making lewd remarks at us. In some other quarters of the market, we faced passive aggression. A man stroking the arm of a marcher holding a big ‘No Touching’ sign, all the while looking her directly in the
eye, smug smile intact.

Or a wheelbarrow pusher deliberately and quickly driving his machine through our midst. But it wasn’t only the men.

A woman queried us softly in Igbo ‘Are we not human beings too? Why should we not touch you?’ and another, still in Igbo lowly snarled

But it was not all negative. We received thumbs-up signs from some female traders, quiet nods from the male vendors, and the occasional ‘Well done’ or ‘Yes!’

Some, in solidarity, chanted back at us ‘Nwanyi bu Ife’ or ‘Nwanyi Bu ike’ which in its simplest translation means ‘women matter’.

The market leaders, predominantly men, wore our shirts and marched with
us. They led chants and spoke with the traders at different parts of the market, as they guided us to open spaces where we could address crowds. They largely acted as chaperones.

On three different occasions, when the chants at the Market March turned rhythmic, the market women danced with us. It is not often that ‘twitter activism’ results in real-world action, and yet, the March has defied all rules to become a national movement.

Testimonies from the first March at Yaba started pouring in almost immediately after. Too many to name, they all echoed the same sentiment:

The March had changed something.

My fellow Marchers were not particularly special people. We were University Students, traders, women’s rights activists, and white collar workers.

Some of us did not speak Igbo, but we learned the chants to perfection on that day.

We were united by sweat and a common purpose.

In Nigeria today, marching is more than a sport. We March so that the girls who come after us can walk freely, and run without being chased.