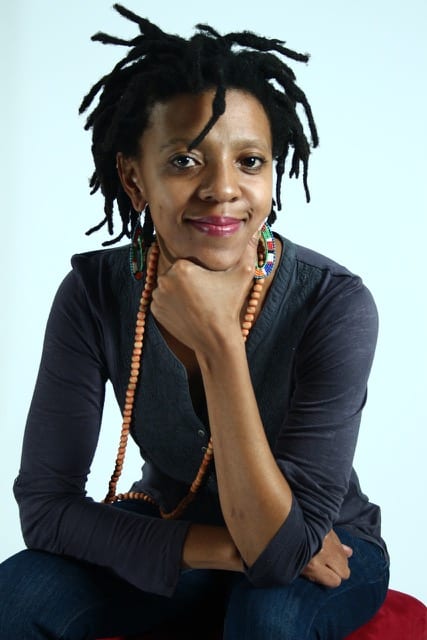 Kgauhelo Dube incorporates her knowledge and experience in traditional advertising into the work she does within the arts, culture and heritage field. She combines these on an eclectic mix of projects, including her own brainchild, #longstorySHORT.

#longstorySHORT was launched in March 2015 to promote African literature through interactive events. These events feature the work of African writers, discussions about important topics affecting literacy in Africa and the sale of books.

Kgauhelo continues to be part of a wide array of projects from festival management, content production for TV to acting as a strategic consultant to various artists, cultural foundations and corporations.

She was 2015 nominee for Mbokodo Women in Arts award in the category of “Promotion of Arts and Culture in the Media”.

You worked as a brand strategist for a firm. Why did you make the move to literature?

The European framing of public discourse is disturbing. Popularising and normalising versus romanticising African ideas, identities, philosophy, languages are instrumental to unlocking the various economic, moral and societal crises we are currently facing.

The arts can play a huge role in social change, especially in South Africa @kgauzagp Click To Tweet

#longstorySHORT has been well received since its inception in March last year. What is the ‘short’ story behind the name, and how was the idea born?

Popular culture has in one way or another succeeded amplifying (whether tastefully or not) very important issues, and so we felt that we could tap into those same strategies and platforms to normalise the culture of reading.

#longstorySHORT hosts a podcast in Setswana. Do you see any financial benefits to publishing in African languages? Is there a growing market for such books for young Africans writers to tap into?

It’s difficult to focus on creating a business model around a culture that has been demonised over centuries. So, whilst there’s an opportunity in getting more Africans to read in indigenous languages, the first port of call would be for us as Africans to love ourselves enough to understand the potential transformative value of the wisdom that’s locked up in our languages.

Being African shouldn’t be about wearing “costumes” on our independence days and during Africa month. There’s no point in pouring a lot of resources in creating African content and selling it to people who mostly associate upward mobility and sophistication with European brands, languages, lifestyles and frame of reference.

Once we’ve dealt with the mind-shift, yes, then there are great opportunities for publishers, writers and content creators to disseminate exciting books, films, learning software in our languages! Think about it, Setswana is not only spoken in Botswana. SA has a huge population of Setswana speakers as well. Remember, we didn’t create the borders so there’s linguistic spill over in countries that border each other.

This is where we use the tactics employed by the marketing industry. It is a classic case of celebrity endorsement.

Instead of endorsing a beverage, the participating celebrity is endorsing African literature.

With 92% of local libraries closed in South Africa and the rise of ebooks, are print publishers in Africa staring at a bleak future?

The going statistic is that 92% of predominantly black schools don’t have functional libraries.

However, there’s been a surge in local libraries being built in these areas post-apartheid, which is why a lot of #longstorySHORT readings happen there.

How does #longstorySHORT engage with those who, for whatever reason, can’t attend readings and don’t have access to the internet?

#longstorySHORT is one of many literacy/ literature promotion campaigns. The scope for the change that needs to happen is not only going to be achieved by us.

There’s an exciting growth in literary entrepreneurship with many great young thinkers tackling the illiteracy conundrum in many different ways. There are festivals, online book clubs, bloggers, road-shows, master-classes and a host of other exciting things happening at the same time. It’s a special time for African writers.

In addition to the work #longstorySHORT is doing, what else can be done to help Africans publishers thrive and encourage bookstores to stock more African literature?

Since a nation’s literacy rate has a direct link to its GDP, more official interventions need to happen. There’s lots of policy around eradicating illiteracy, but there’s very little enforcement, monitoring and evaluation.

Governments have to have a more urgent, creative and spirited approach to these problems. It’ll never be enough to highlight these challenges within the contexts of calendar days such as World Book Day and World Mother Tongue Day. Consistent intervention is key.

What does the future hold for African literature, and more specifically for #longstorySHORT in the coming year?

From a promotional perspective, we believe the brand #longstorySHORT has high equity. Now the challenge is maintaining the frequency of readings and reaching remote audiences all over the continent.

That requires some brave brand managers and philanthropists pledging their marketing budgets and collaborating with us.