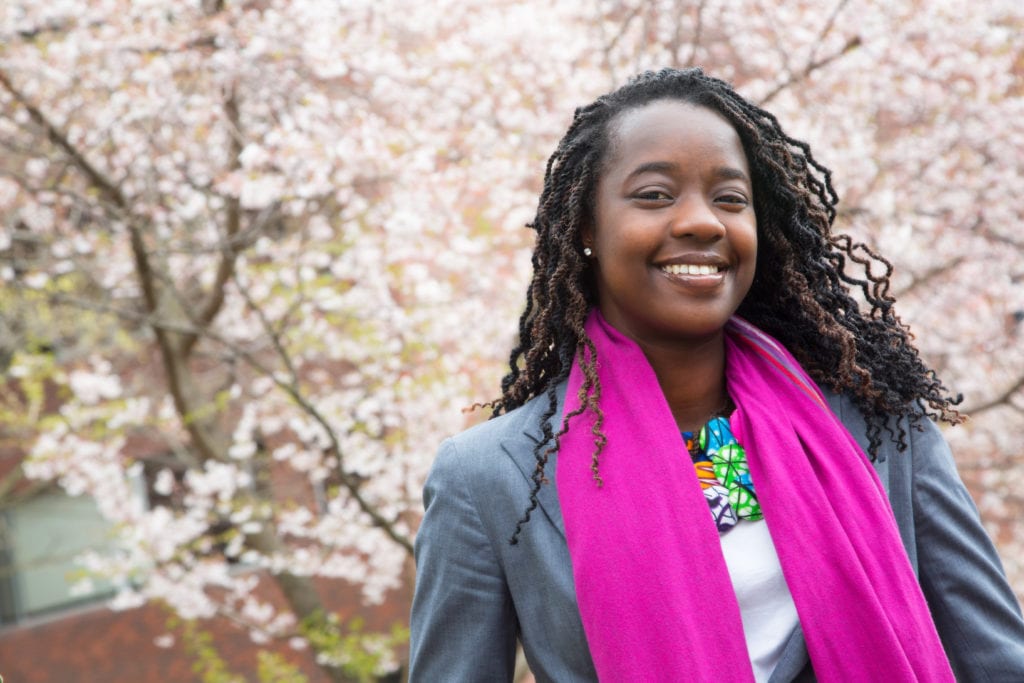 When you’ve graduated from not one but two Ivy league schools it’s safe to say you are one highly educated individual. Amandla Ooko-Ombaka is not only book smart but has built her professional career with years of experience as a Management Consultant at McKinsey & Company, the world’s biggest consultancy firm.

You’d think that would be it for her but not at all. Amandla’s ambition has her advising various non-profit boards as well as co-founding initiatives such as Second Story Africa and the Yale Leadership Institute. We can’t resist adding that she’s currently writing a biography of her late father, top Kenyan lawyer and politician, Oki Ooko-Ombaka. Our SLA contributor managed to secure a few minutes of her time to see if she does ever

Our SLA contributor, Diana Odero managed to secure a few minutes of Amandla’s time to see if she does ever catches a break and to find out what motivates her.

How does one juggle the various hats you wear and do it so well?

I think the notion of daily balance is false so I don’t try and achieve balance on a day to day basis. It’s impossible with the job I do, where sometimes I work 17hr days, to say that I will go to the gym today, I will cook today, I will see my friends today…it’s just not possible. So I think the first step was allowing myself to think about balance over a period of time and that also gives me time to evaluate. Every two months I try to live a balanced life. Meaning in those two months, there’s good periods of working out, of sleep, of seeing my family and of work.

The second step was learning how to say no, which I think has been a much harder lesson for me to learn. I find it very hard to say no especially to people I care about. So, I sort of tell the person asking me to do this or the other; that this is a really cool opportunity and I’m grateful but have to say no in the hope that this opportunity will be there again in future. Once I remove this notion that I’m not the only one who can do this thing, it makes it easier to say no.

On top of your quite extensive and busy schedule, you are also writing a book. Tell us more about it and why you felt a need to do this now.

The book is a biography of my father. It has been a passion project for the past 10 years. My siblings and I had constantly talked about doing it. I finally took some time off between graduating last year and going back to work to put some real time into the book. The process revealed itself in many different ways one being the more we work on this, the more it becomes our own story. We’re discovering who our father was and the contributions he gave to this country and to this world.

I realize we are in a very unique position as his children to write about our perspective of him. We are trying to juggle telling his story and telling ours because his story has so much merit to stand on its own but our story is also valid and legitimate.

The timing of this could not be more perfect as I finally moved home after living abroad for a while and I would love to get engaged in politics at some point. In many ways, my political identity is very much tied to my father’s political identity. So I need to understand him, who he was in his early years of politics and what formulated his opinions in order for me to make my own opinions.

You recently completed a dual Masters degree at Harvard, something not many achieve – what motivated you to pursue the two courses – an MBA and MPA/ID (International Development), simultaneously?

I chose the dual degree because it was a reflection of who I am as a person. Some people may think it’s a lack of focus but my heart is very much in the public sector and my mind is very much in the private sector and I’ve just stopped fighting that. I’ve embraced who I am and my heart and my mind need different avenues to be fulfilled and to work optimally. Harvard business school catered to my mind and the public sector school while Kennedy catered to my heart.

At a more fundamental level, I think that we need more multidisciplinary thinkers in the world we live in. Things are exceedingly complex and we need the sectors to work together. I don’t think business and government should be the same thing but we need people who can walk between the two worlds. Harvard doesn’t want you to be half a business person and half a public sector person. You should be able to completely hold your own in the two separate schools which I think is really important.

I’m multidisciplinary by nature and I think there’s a role for people who think like me. A lot of the things I care about like power and utilities will not be funded by the government. The private sector will fund a lot of these projects, but they need the government to eventually take over asset ownership, right of passage etc.

These two disciplines need each other so much more than we like to talk about. It is my life’s mission to bring them closer together. The joint degree was a perfect way to try this. I really think it makes me a better person for this country to have both skill sets. The question I face now is when to use which one and when to apply both of them.

You have spent most of your adult life away from your home in Kenya and moved back 12 years later. What inspired you to come back and how was the transition back to the continent?

Most of my friends are returning home and it makes me happy to see that. When you are abroad and not involved in civic life back at home, you lose certain privileges like complaining about the status quo. I chose to come back because this is where I want to give the most productive years of my life. I believe we can build the country my dad saw and I wouldn’t be able to do that being away.

Strategically speaking, because I want to get involved in government, I wanted to be here before the next election to know the law of the land. As for transition, I’m grateful that in the time I’ve been away I have been able to come to Kenya several times. Especially while I was working in Lagos, I would be home almost every month so there wasn’t a big transitional change.

What makes this different though is that I’m not home on vacation anymore so it’s the little things that have been hard to adjust to. Things like Uber drivers not having a working GPS, or not knowing where they are going but I have learnt to just release all that to avoid stress. I’ve learnt to pick my battles and decide which ones I am willing to fight against and change. For example, the stand on homosexuality here is very different from what it is in the west and to me, that is a big problem.

Most of your initiatives and projects focus on leadership and Africa. How important is it for African women to be leaders in their respective communities?

It is critically important. Statistics show that we have more women than men in this country. However, beyond the facts, I think women have proved to be very different leaders than men. We have a real problem with titles and actually exercising leadership here. I think women exercise leadership in the household every single day. If the woman is in charge of finances in a home, then the children have a higher probability of getting educated and the returns on education are endless.

Amandla Ooko-Ombaka: Women are different leaders and we need more of them in leadership Click To Tweet

Women make much more long-term decisions and invest in things that have much longer returns. The fact that women are different leaders shows we definitely need more of them in leadership. A bad outcome would be having women leaders who are not ready to lead so we need to create access, giving women who want to lead the chance to do so.

We need to have a broader conversation about how we provide mentorship and support for women at each stage of their lives. The reality is that there are people who have to give up power for others to access power and that’s a conversation women can’t have by themselves so men have to be involved.

Having worked in both the private and public sector while at McKinsey, which one do you prefer and why?

That’s such a hard choice to make! One of my mentors actually explained it to me in this way; if you think about scale and resources on a spectrum -the government is the ultimate in scale and the private sector does not have that.

Maybe some companies do have that scale like Facebook and Google but in general, the government is the overall scale leader. Often times the resources and the skills are in the private sector. I think we live in a world where we need both of those things -scale and resources as well as funding.

I love the intersection of these two sectors but if I had to completely choose, I’d pick the public sector. That is where my passion lies and also because I think the government is solving the most challenging problems in the world, it needs the best resources.

My passion lies in the public sector the government needs the best resources @AmandlaOO Click To Tweet
Pages: 1 2