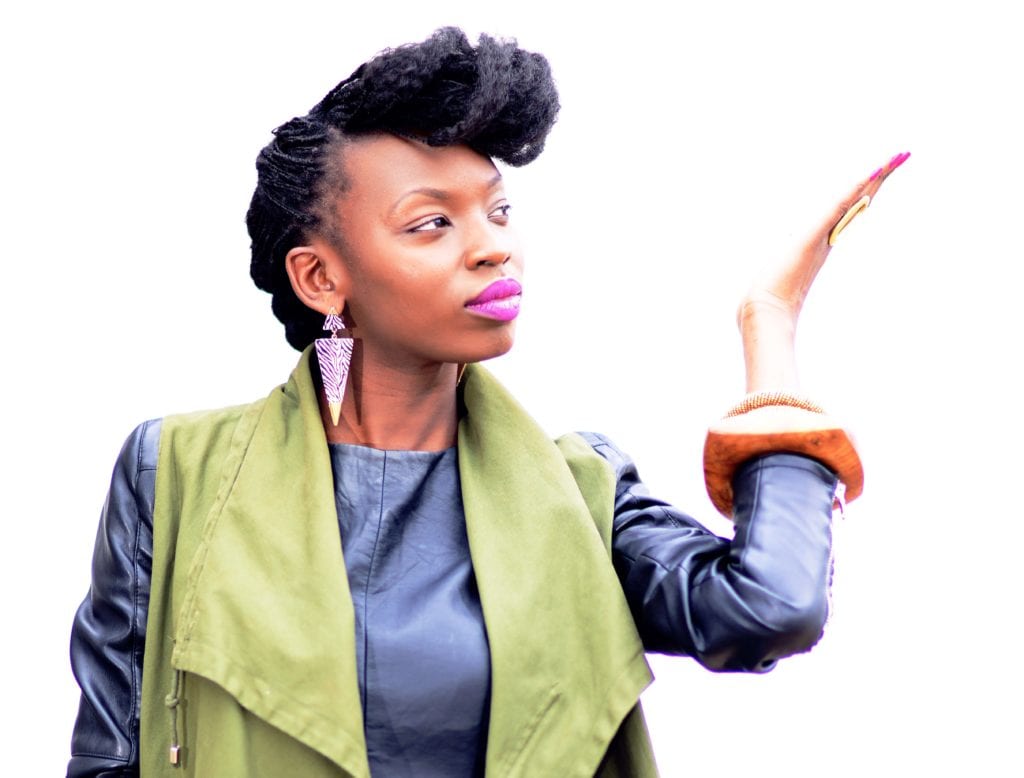 A celebrity publicist, a Public Relations maven, journalist, blogger and all round music and entertainment aficionado -Anyiko Owoko is the perfect definition of more than a triple threat.

The young connoisseur is the publicist to award winning East African music group; Sauti Sol. Starting out as their friend and assistant, Anyiko has risen to media success thanks to her work with the boy band. Anyiko also works with many other talented artists on the continent and beyond who have seen her prowess as an influential communicator and brand strategist.

Now she intends to expand her growing PR company –Anyiko PR and let SLA contributor, Diana Odero in on her journey to where she is now and why she is fuelled by creative people.

You have the incredible role of being Sauti Sol’s publicist. How did this come about?

I have always been their friend to begin with. I was initially friends with Chimano in particular, who I met in 2006 at Alliance Francaise where I was studying French. Funny thing is, we weren’t even in the same class so I don’t really recall how we became friends. Chimano would always tell me about his friends and him singing in high school and now that they were done, they were thinking of starting a music group. He wanted my opinion on that.

So I sort of became their advisor from back in the day and I encouraged them to take on the music group idea. Chimano and I joined the choir at Alliance and we really liked it but Chimano felt that he needed his friend (from high school) to join in as well. We both convinced the choirmaster to allow his friend -Bien Baraza to join, even though non-students weren’t allowed in the choir. Later on Savara and Polycarp, Chimano’s other friends were brought in and they were a full singing group in a choir.

After we completed the French program, we enrolled into University and surprisingly Chimano and I ended up in the same school, in the same course and in the same class. That’s really how it all started and as for me, I’ve always loved writing and communicating.

As a friend, that was a great quality I had that was able to help them get their group off the ground. I have been their road manager, an assistant, I got them onto social media and after several years, they realized that I was the main person doing their publicity. I knew they would become big stars from way back in the day and so I did all I could to secure their brand and maintain their presence in the music industry.

They of course now have a bigger team; I even have my own assistant as well, so at least we have a lot more help than we did when it was just the boys and I.

Did you always want to get into the public relations field?

No, I never saw myself doing this kind of work. PR kind of just found me because of the work I was doing with Sauti Sol. My plan had always been to get into writing and become a journalist. PR is part of communications so it still lies in my preferred field but I guess you can say I ended up specializing in it.

Anyiko Owoko: PR kind of found me because of the work I was doing with Sauti Sol Click To Tweet

I wanted to do broadcast journalism, which I have been doing actually; I’ve been working in TV for the past seven years. I still write though, I write for DStv, for the Daily Nation, I run my own blog and I also write for the Coke Studio website. So I’m still doing what I always wanted to do and I’m grateful to have found something else that I can do that contributes to the industry.

How did you know that it was time to leave the employee life and become your own boss?

I recently stopped working in TV this past September because I wanted something new and more challenging and needed a break from my broadcast career. About three years ago, I started feeling this way, I always wanted to leave but it was a bitter-sweet decision to make as that was my first official paying job.

I was still in college when I got that job and for a journalism student, landing a job hosting an entertainment show in a national network was and still is quite a big deal. It was a really great show with great content that you don’t get much of nowadays in Kenya.

I knew I wanted to leave when I realized I wasn’t learning anything new. People would come on the show and I would train them on hosting, reporting, scriptwriting etc. and no one was teaching me anything new. The producer of the show who discovered me had already left the network and I was now answering to his juniors even though I had more creative experience than they did.

In addition, things were really changing fast in the world of media, including social media . The show was stagnant and I started interviewing the same artists all over again due to lack of content so it was getting too monotonous for me.

Now I have my own column in Yummy Magazine where I interview all kinds of celebrities discussing food and lifestyle, which is something I never thought I would do. I started my own company and all this has been the breathe of fresh air that I really needed.

I really don’t know, probably all of them. I don’t think there’s a way for me to gauge that because I meet a lot of people and the impact is really vast. Almost every single interview I have done has impacted me because most of them have very powerful stories of where they came from.

For example, Nigerian artist, Patoranking used to be a street boy. He lived in the biggest slum in Nigeria and now he’s the biggest dancehall artist in Nigeria. Our very own Octopizzo took me to where he used to live before the he became a big artist. It was in the middle of Kibera (Nairobi’s biggest slum), in such a tiny house.

I remember when he put out his first video, I was the first one to interview him in Kenya on TV. Then people looked down on him, but look at him now. Sauti Sol also got their first interview courtesy of me. It was in the school paper at university, where I was the features editor. Such moments make me remember why I do what I do.

My work gave these artists a platform that took them to greater stardom in the long run. It’s very hard to choose a favourite because there’s something special about each person I interview.

Anyiko Owoko: My work gave artists a platform that took them to greater stardom Click To Tweet

If you could be anything else (career wise) what would you be and why?

Oh my God, almost anything! I always wanted to be a lawyer when I was younger, an architect, a musician, and a policewoman at some point. An author…

There’s so many things I wanted to do and I could easily have done them all. I didn’t realize that I wanted to do journalism until much later in life.

Name three women who inspire you and why.

She is such a hard-working and powerful woman. My dad passed away when I was 9 years old and we are five kids, one boy and four girls. She raised us all so well; I never felt like something was missing even though I did miss my dad’s presence. There isn’t anything I think he could have done to raise me any better than she did. She did the work for both of them so I never felt like I was missing out.

My mother always empowered me and even while I was undecided about my career choices, she was always supportive. She shaped who I am today and as an English teacher she taught me how to talk and write. At the age of 10, I was helping her grade English essays for students in higher classes than me. She didn’t realize she was helping mould me into a good writer and journalist.

She is a no-nonsense person who keeps to her word. Everyone knows how hard-working she is, and that she is good at what she does. When she was on radio she was very tough and never minced her words.

Caroline Mutoko inspires me with the way she grew her brand and became the media mogul that she is now. That growth curve shows me that even now, where I am, who knows where my experience can take me. She’s shown me the possibilities of where I can get to.

She is tough and also very powerful. She is a great example of how women in power should carry themselves. People believe this myth that a woman shouldn’t be a leader because they are not as good as men in the leadership aspect. Michelle has put all those misconceptions to bed with her strength and her belief in all that she champions.

She goes above and beyond in everything she does. For a black woman to make me and all black women and girls so proud is a very big point of inspiration. She has a lot of grace, style and is very caring. We forget that as women, we don’t have to give up our femininity just because of the fields we work in.

What advise would you give to young future Motherland Moguls looking to get into PR?

I would tell them to sharpen their communication and writing skills. Writing reports are the most important actually and they should concentrate on achieving their objective and making the client happy.

That’s basically it. Keep calm during a crisis; while people yell and come at you, the best thing to do is keep your cool. There’s nothing much you can do in a crisis until a solution is found.

What mantra do you live by?

Go out there and make your dreams a reality. I’m a dreamer and as are so many people out there; but they are always saying how difficult it is to achieve their dreams. It starts with you though.

If I don’t get out, you don’t get out, no change will happen. People will always put you down, but what if you get out there and actually do it? You have to keep pushing until you see your dreams come to life.