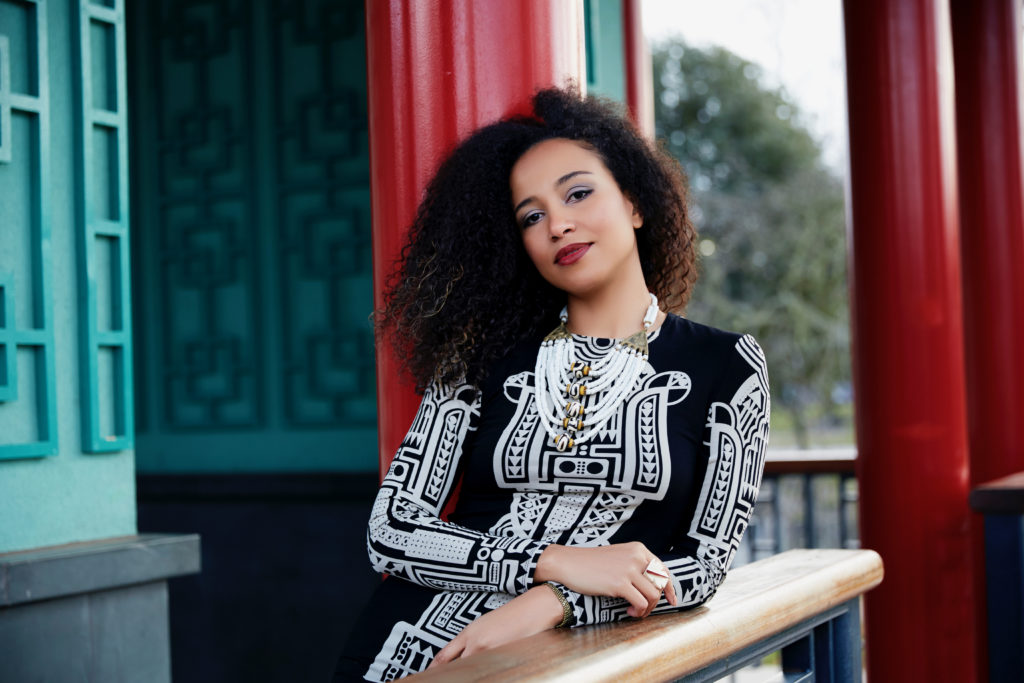 Listed by ELLE Magazine as one of “12 women changing the world”, Minna Salami is a Nigerian-Finnish writer, blogger and commentator who has contributed to the popularisation of African feminism through her blog, MsAfropolitan.

Her writing appears in the UK Guardian, Al Jazeera and The Independent. She is a columnist for the Huffington Post and The Guardian Nigeria, where she writes a bi-monthly column. Salami is a member of Duke University’s Global Educator Network and the Guardian Books and Africa Networks.

She grew up in Lagos, Nigeria, in a multi-racial and inter-faith household where four languages were spoken, and has since lived in Sweden, Spain, New York and London.

As a blogger who has written about feminist issues for many years, can you define in three words who a feminist is? Why does the word frighten some?

I’d like to first say that like all ideologies, feminism is an always changing one. So anything I say is simply my contribution to the forever changing landscape of what it means to be a feminist.

In that vein, here’s what I think. A feminist is a person who believes that feminism is the best tool (movement, framework, ideology) for the cultural, political, sexual and psychological liberation of women, men and all genders. By the way, I believe that although men, through manipulation, violence and force, now inhabit the top position in the gender pyramid, they are also imprisoned by our current forms of social relations, even if their “prison” has golden bars.

Anyway, in defining a feminist this way, I’m simultaneously suggesting that a feminist is not merely a strong woman who happens to be a politician, a single mother of three, a sassy seductress, a successful entrepreneur etc. as many seem to think. While such women may be living their lives in a feminist way, a feminist is ultimately one who at least has an awareness of the political philosophy of feminism.

The reason that I nevertheless formulate it the way I do is because I think that the canon of feminist philosophy is a treasure. Just like anyone who calls themselves a Marxist, would engage with economic systems, workers, the bourgeoisie etc., feminists benefit from engaging with feminist theory.

Who is the empowered woman, and what’s your opinion on the use of the word ’empowered’ as a marketing tool?

At the risk of sounding too spiritual, or something, let me first say that I believe that if there is a purpose to life, then it is self-actualisation. Some might call this “becoming the highest version of yourself”.

Now, there are two types of obstacles to self-actualisation. The first are psychological obstacles, e.g. fear, family abuse, depression etc. The second are socially constructed obstacles. These can, depending on your gender, ethnicity, sexuality, class or race, follow similar patterns. To use an academic term – these obstacles form ‘institutionalised oppression’ – meaning that they are obstacles that are systematic and reinforced by established laws, customs, and practices.

I believe that if there is a purpose to life, then it is self-actualisation - @MsAfropolitan Click To Tweet

Bearing those two types of obstacles in mind, I would say that an empowered woman is one who is able to identify and subsequently transcend the obstacles that stand in the way of her self-actualisation. It’s not the same process for everyone, and it’s not an easy process for anyone, but society sets it up especially difficult for certain groups. As for the business of empowerment, yes everyone from Coca-Cola to Ariel to H&M is now in the business of empowering women. The problem is that their formula is to cater to the first types of psychological obstacles I mentioned above while ignoring the institutionalised oppressions caused by traditions, social attitudes, sexual norms, the institution of family, international politics, the legal system, higher education, religions, professional spaces etc. This makes most so-called feminist marketing campaigns not only hypocritical but counterproductive.

That said, there are also brand campaigns that get it right and address both types of oppression in creative and innovative ways. Goldieblox had a pretty cool campaign some years ago. I’m not saying that using empowerment as a marketing tool is in itself an issue. What matters is that consumers discern genuine from faux empowerment.

What are the two biggest challenges facing professional women in Nigeria, and how can they be solved?

I would say, firstly, the absence of adequate constitutional rights. And secondly, the absence of a robust civil society fighting for adequate constitutional rights. The absence of both disturbs the smooth flow of a woman’s professional life. This is because there are no clear parameters for dealing with challenges that women are bound to encounter in professional life such as sexual harassment, maternity leave, domestic life-work balance, insurance policies, minimum wages, equal pay, and so on.

Feminist civil society groups are needed for various reasons. They educate women about their rights (or lack of rights) in the workplace through workshops, conferences etc. They formulate gender-sensitive policies and push for constitutional reform. Civil society groups teach women about feminism and how it can help them achieve real empowerment. They gather statistics and equip women with practical tools such as how to obtain bank loans or how to use technology to their advantage. They encourage women to become journalists, activists and to enter politics.

Organisations such as yours, She Leads Africa, are crucial for solving challenges in business. Other examples of vital organisations are the African Women’s Development Fund (AWDF) for funding initiatives, Women’s Rights and Health for health concerns and KIND for girls and leadership. At the end of the day, it is up to women to use and change the law to effect change.

The law is our best weapon against patriarchy.

A lot of women have been conditioned to see other women as the enemy. They refuse to collaborate with, amplify or help female colleagues, even though doing so benefits them. Why do you think that is? And what’s your advice for women working in male-dominated fields?

I guess there is a logic to the fact that when a group of people are marginalised they are bound to become competitive over the scraps left for them. But I would like to also consider the personal internal environment in which unhealthy competitiveness resides. It seems to me that our culture conditions women to feel a sense of lack within themselves.

In our society, there is always something a woman lacks —a husband, a boy child, a slim body, youth, wisdom, confidence, humbleness etc. Her internal world therefore becomes a milieu of confusion, one day she’s being asked to be this, the next day the opposite… So because she is constantly feeling that something is missing, she becomes bothered when she perceives another woman is in possession of it.

Minna Salami: We need to cultivate a culture where women feel the opposite of lack Click To Tweet

How to do that? I could write a book about it, but let me just say for now that it has to with placing female-centric values at the centre of our world view. Women will often evaluate themselves from a male-centric viewpoint which is never going to make them feel whole and complete.

There’s been a lot of discourse about empowering women for the sake of economic growth. Do you think it’s dangerous for policy makers to focus on achieving gender equality for economic reasons rather than because it’s a human right?

However, equality should evidently be driven by other reasons than capitalism. It should be driven by visions of a holistic and prosperous society in which people of all genders gain satisfaction/value from their work. The more there is work satisfaction, the more the economy will become self-sufficient as people will spend money on local products, services, leisure activities etc.

Furthermore, the statistics raise a few questions. After all, more women are contributing to our economy and yet Nigeria is in a recession.

The question women should be asking is: How is the money they are contributing to the economy benefiting women? The system should work for us and not vice versa. Put it this way, gender equality is indeed necessary for economic growth, but economic growth is not the only reason we want gender equality.

You’ve given speeches around the world on feminism, what misconceptions do people have about African women with relation to gender equality and feminism?

The main misconception that people have is that African feminism is a “different” feminism in the sense that it is more lenient, that it lets men get away with still being the head of the family while the woman is the neck. That kind of thinking.

There is some truth to this presumption – that the type of feminist activism that revolutionises society at its core, as happened in much of the west in the 70s and that’s happening in Eastern Europe and some parts if Latin America now, is yet to change the status quo in the African continent.

However, it is in Africa that I have encountered women with the most dedication to the feminist revolution; women who do not pander to patriarchal narratives, and women who inject a deep humanism and criticism to the global feminist discussion.

What’s does the future hold for your award-winning blog, MsAfropolitan?

Hopefully more of the same. As well as new types of discussion and awareness-raising. At the moment, I’m developing an essay/concept titled “Oyalogy”, which is based on the Yoruba goddess [of winds, lightening, rebirth and death] Oya; and is a mythopoetic approach to African feminism.

I’m planning to turn it into a performance piece. The project is still in the early stages but my aim is to share it with women in different parts of the continent in order to encourage a dialogue around the issues raised in it.