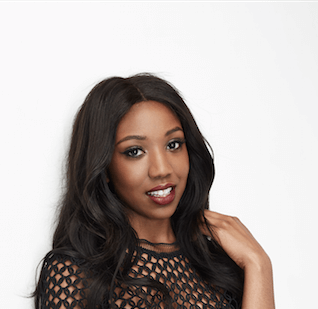 Magnify magazine was described by the Huffington Post as ‘the women’s magazine breaking every stereotype out there, and [in the process] turning the idea that religion is stuffy, unfashionable and sexist on its head’. As a consumer of Magnify’s third and very bold issue I must say I totally agree! The magazine contains incredible material about the challenges that face millennial women today all encapsulated with the mantra: Fashion. Faith. Feminism.

The timing couldn’t be more perfect for such a declaration. With the political climate as it is, and women under increased scrutiny, this may be just what we need! A reminder that who we are is enough and that being true to you is totally worth it.

I was delighted to have a conversation with Magnify’s Editor, Ruth Yimika Awogbade. Whilst the word feminism often leaves a bad taste in one’s mouth, Ruth is breaking barriers by using it boldly.

Tell us about your experience starting your own magazine. How did you decide to make it about the three F’s?

I started Magnify as a series of events when I was 19 in 2008, in my first year at Durham. The phrase that in many ways encapsulates the journey so far is, ‘Faith is taking the first step, even when you can’t see the full staircase.’

It started out as one event to give my friends the opportunity to explore faith in an engaging way. It grew to a series of events and digital content, then I realized I wanted women to have something they could take away to digest in their own time. That’s how the magazine was born.

For a while, I was thinking of a tag-line to express our core values of empowering and celebrating women. This would be based on a foundation of faith yet presented with beautiful editorials. The three words —fashion, faith, feminism— literally dropped into my mind when I was on the tube for a meeting. It felt perfect, engaging and simply encapsulated what we were about.

What inspired the third issue’s slogan ‘Be a Voice, not an Echo’?

I think often as women, and particularly millennials, our role is often traditionally seen in relation to being the helper behind the scenes. Particularly too with the rise of social media, there’s a trend to be someone who follows the crowd.

My hope is that through the magazine, readers would feel inspired that wherever they are. They have been placed in a sphere of influence with purpose. We all have a unique voice, a unique character and passions that can be used to make an impact and a difference. Often the challenge is to find our voice, but I believe with so many communities of women empowering and supporting each other around the world, this is more possible than ever. 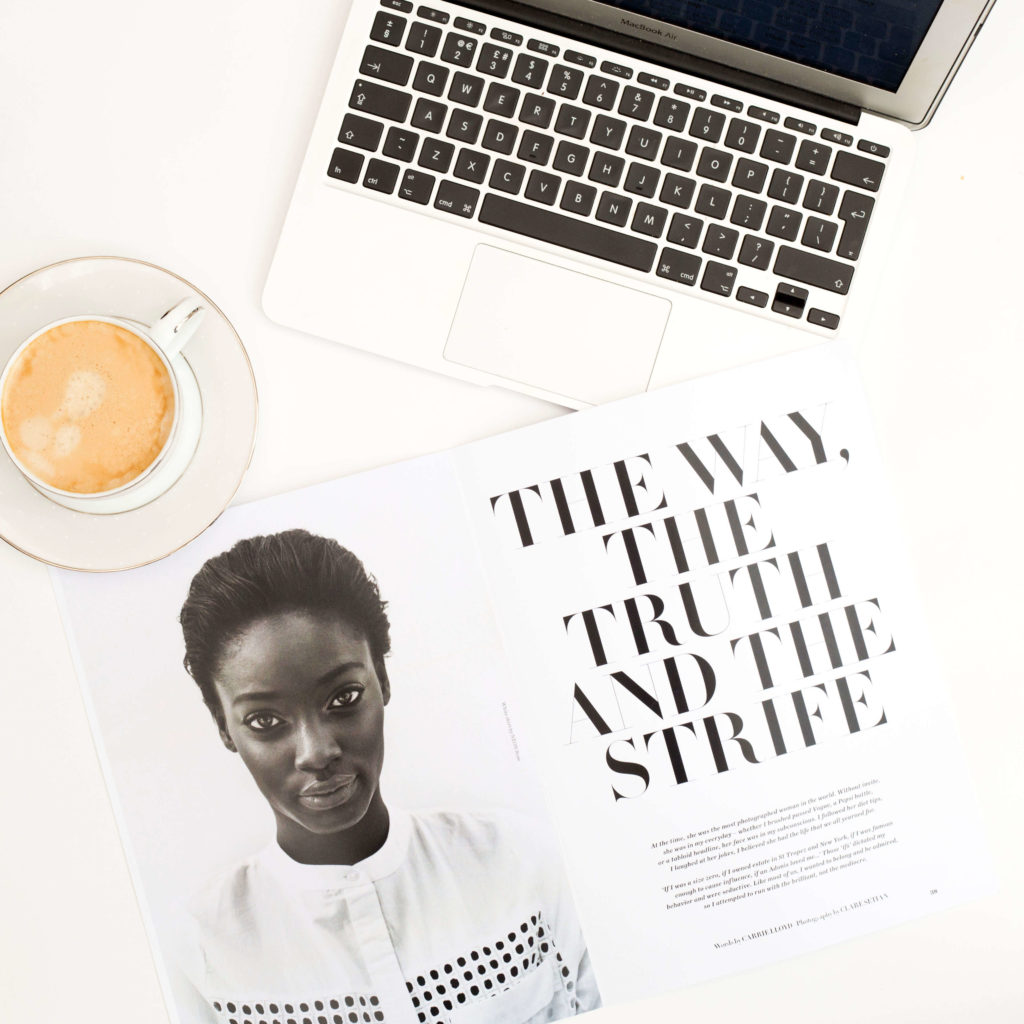 How do you think women will relate to this in light of everything that has transpired politically and socially this year?

It’s interesting; I could have never predicted how relevant the title would be in light of what has happened politically and socially —especially with the result of the recent US election.

As a team, we’re always trying to challenge the stereotype that Christianity is sexist and out of date. In many ways, I found the overwhelming support by evangelical Christians of Donald Trump slightly confusing and disheartening; especially as a black Christian woman. However, I was so encouraged to see prominent Christian women leaders calling out the blatant sexism and double standard.

It was amazing to see how many women got behind Hillary —not just because she’s a woman but because she was the most qualified for the job. I hope that our generation realises that there is no better time to rise up and be bold and confident in using our voice and platforms. This despite the progress that still needs to be made in the faith and political arenas especially.

The perception is often that print media is dying…why do you think having a magazine is so important?

I think traditional magazines that cater to mass audiences are in decline. However, magazines that target demographics with a certain mindset or niche are on the rise. People feel a level of attachment and loyalty as they are value adding. In Magnify, we feature issues that go right to the heart of who we are and that I hope give readers the opportunity to self reflect.

Having something that women can digest and explore in their own personal time, away from the busyness of life is so important.

Ruth Yimika Awogbade: We all have a unique voice that can be used to make an impact Click To Tweet

What would you want people to take away from reading this issue that makes it different from the rest?

Magnify isn’t your typical fashion, lifestyle or faith publication. We aim to empower women across every area of life. That is why we feature articles on faith, identity, relationships, mental health, the arts and entrepreneurship.

I hope from reading this, women would feel inspired in their own personal journeys and empowered to know that we each have a purpose on this earth which can be fulfilled. And also know that life isn’t perfect —particularly of those we admire who have achieved success. Everyone faces challenges, but even with them, you can still be a voice and make an impact. 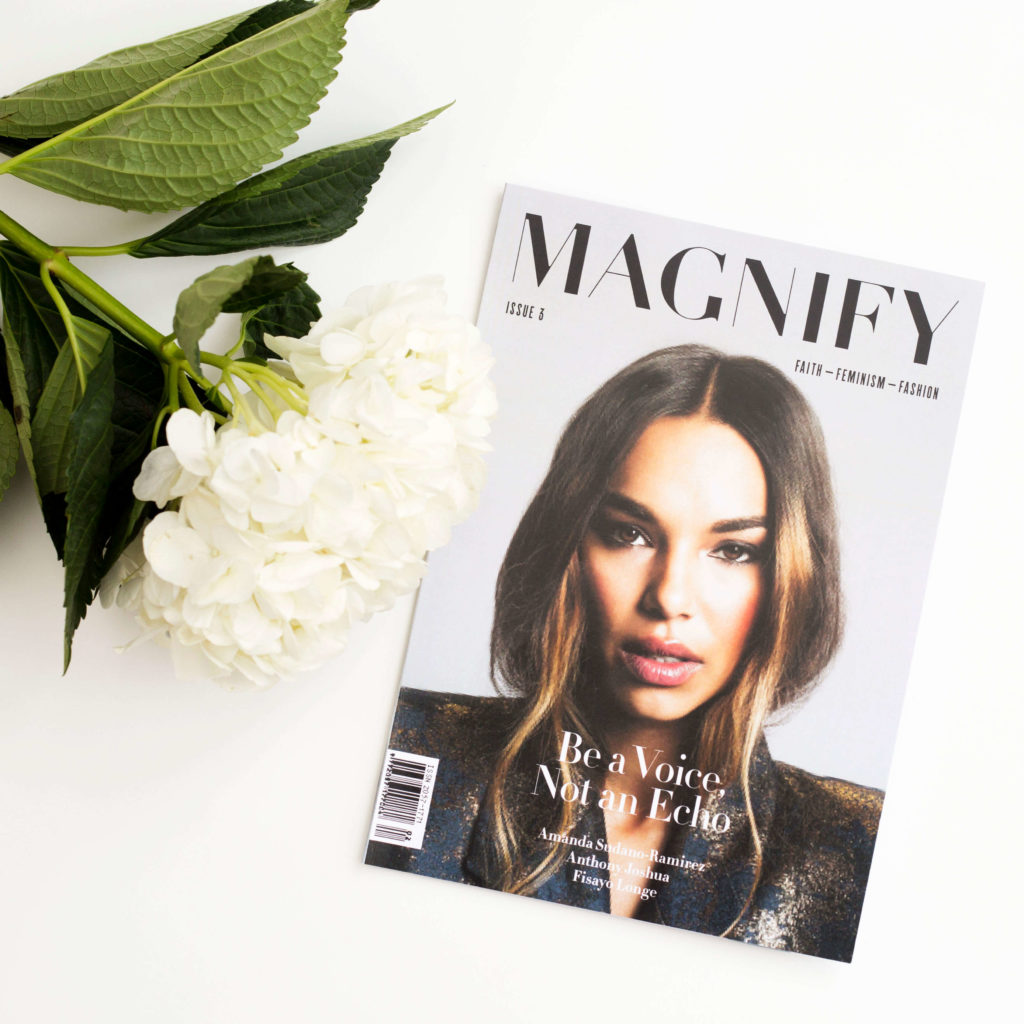 What role does feminism play in this issue? And how do you think African women can relate to it?

Feminism plays a big role in this issue, particularly looking at it from a variety of angles. In particular, one of my favourite interviews is ‘Faith and Feminism: A man’s perspective.’ For feminism to be embraced, men need to fully understand it too.

Particularly in societies that have very traditional gender roles, it’s even more important for both sexes to come on board and be part of this discussion about feminism.

In this issue, we’ve also profiled a number of inspiring Africans from Duro Oluwo, to Anthony Joshua and Fisayo Longe which I hope will be a huge inspiration as to the impact Africans are making across many industries in today’s world.

A lot of our SLA readership consists of what we call Motherland Moguls. What advice do you have for anyone who feels like they do not have a voice?

Having a mentor is so important, even if you can’t have one up close and personal. Platforms such as She Leads Africa are so important in helping each of us learn from people who have done it already. They also give practical advice as to how we can pursue our dreams and make a positive impact in our sphere of influence.

Lastly, I believe we all have a voice. That’s something I take as real fact everyday —even the days where I feel like I don’t know what I’m doing. Particularly on those days, you need to surround yourself with people who encourage you.